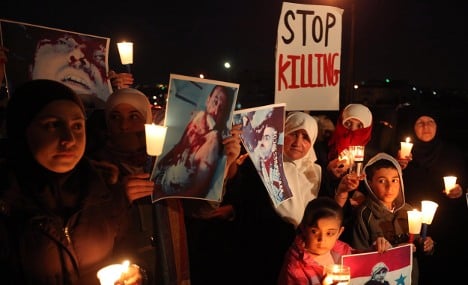 “The ongoing violence against protesters (in Syria) is alarming and shocking,” government spokesman Steffen Seibert told a regular news briefing in a strongly worded statement on behalf of Chancellor Angela Merkel.

He said the flashpoints of violence in recent days “represented grave human rights violations by the Syrian government and its security forces.”

“The German government condemns the fact that peaceful demonstrations in Syria are being broken up violently and that, primarily in Daraa, demonstrators have been shot and killed or severely wounded,” he said, referring to the southern town where rights groups say 26 people were killed on Friday.

“The chancellor wishes to express her deepest sympathies to the families of those killed and, on the political level, she calls on the Syrian government and President (Bashar al-)Assad personally to protect the right to peaceful expression and peaceful demonstrations.”

“Now would truly be the time to turn those words into action,” he said. “We also call on the Syrian government to bring to justice those among the security forces who are responsible for the deadly shots against peaceful demonstrators.”

An unprecedented opposition movement erupted in Syria on March 15 challenging the regime of Assad, who has been in power since 2000, to introduce major political reforms.

Anti-regime demonstrations and clashes with security forces raged across the country on Friday leaving 28 dead, including 26 in Daraa, according to an updated toll by six Syrian rights groups.

And on Sunday, witnesses said government forces killed at least four people and wounded 17 in the coastal town of Banias.