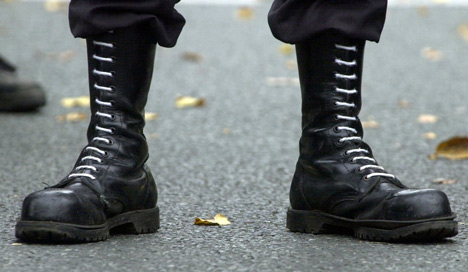 Interior Minister Dietmar Woidke announced in Potsdam that the Freie Kräfte Teltow-Fläming, or the “Free Forces of Teltow-Fläming,” would be the sixth such organization to be banned in the state since 1995.

The last right-wing extremist group to be banned was the Schutzbund Deutschland in 2006.

A large police contingent of some 175 stormed group locations in Blankenfelde-Mahlow and Zossen early on Monday, confiscating evidence.

“To enforce the ban, raids have been ongoing since the early morning hours today as part of a major search and confiscation operation by the police,” the ministry said in a statement.

According to domestic intelligence service reports from 2010, the neo-Nazi Freie Kräfte Teltow-Fläming has been active since 2006. Last year it had about 50 members, mainly in the northern cities of the Teltow-Fläming county.

Its influence has been responsible for a rise in right-wing extremist activity in the region, the report said.

On its website the group calls for a “revolutionary national socialism,” in a reference to the Nazis’ declared ideology, and its members regularly seek out confrontations with political opponents, authorities said.

Members have been held responsible for the January 2010 arson of a Zossen anti-racist group’s “House of Democracy,” which was completely destroyed.