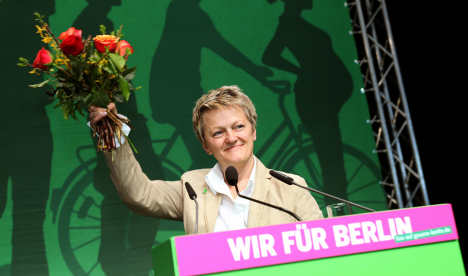 Fifteen percent of those surveyed by polling company Emnid for Focus magazine said Künast was the Green’s best bet for chancellor, in the event the party puts forth its own candidate ahead of national elections in 2013.

The Greens have been riding a wave of popularity in recent months, with another survey released Wednesday for broadcaster RTL and news magazine Stern giving them record approval of 28 percent. The poll result is the best ever registered for the party.

Green politician Winfried Kretschmann is set to become the party’s first state premier in history, leading a coalition with the Social Democrats in the state of Baden-Württemberg.

More than 40 percent either did not respond or said none of the aforementioned Green party politicians were suited for the job of chancellor.

Künast announced in November that she was throwing her hat in the ring to run against Berlin Mayor Klaus Wowereit in 2011.

On Saturday, she was officially confirmed as the party’s lead candidate for elections in the fall. During a meeting of Green party members in Berlin on Saturday, Künast received 91.3 percent of the votes to run.

Earlier, the Green parliamentary group leader attacked Berlin’s red-red coalition government of centre-left Social Democrats and the socialist Left party. “We are sick of being governed by an uninspired, tired senate that ignores the problems,” Künast said.

She said the Green Party was ready to address those challenges and find solutions.

“We will reach the minds and hearts of Berliners with honestly, credibility and commitment to our values,” Künast said.