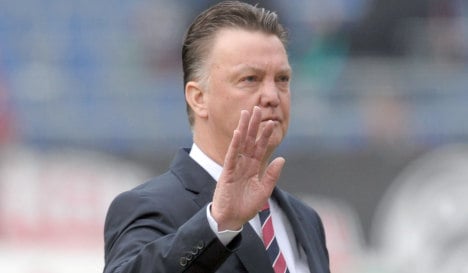 The result means Bayern have dropped to fourth in the Bundesliga and must finish at least second in the table to be sure of a Champions League place next season, with five games remaining.

According to both German daily Bild and football magazine Kicker, the

decision was made by Bayern’s board.Van Gaal’s assistant Andries Jonker will take over as caretaker head coach, with Hermann Gerland as his assistant.

Bayer Leverkusen’s coach Jupp Heynckes has already been announced as Bayern’s head coach for next season.

Van Gaal, 59, was told last month his contract, which was due to expire in 2012, would be terminated at the end of the season.

Bayern’s playmaker is now suspended for a crunch Bundesliga clash with second-placed Bayer Leverkusen next weekend, having been sent off at Nuremberg by referee Knut Kircher on Saturday.

Robben was furious after his team conceded a late equaliser which saw them drop to fourth in the German league and slip further behind in their bid to finish second in the table to secure a Champions League place next season.

The Dutchman admitted he lost his head after exchanging heated words with Kircher, despite the game being over.

“I don’t know what I said any more,” admitted the 27-year-old after the second red card of his career.

“I was very angry, very disappointed, but I should be sorting that out with my teammates and not with the referee. I want to apologise to the fans and the team. I shouldn’t have done that.”

Robben is reported to have apologised to Kircher at the Nuremberg stadium. His last dismissal was in March 2006 while playing for Premier League side Chelsea against West Bromwich Albion.

Robben will now appear before the German Football Federation (DFB) disciplinary committee next week which will determine the exact length of his ban.

“Hopefully it won’t be too bad,” he said.