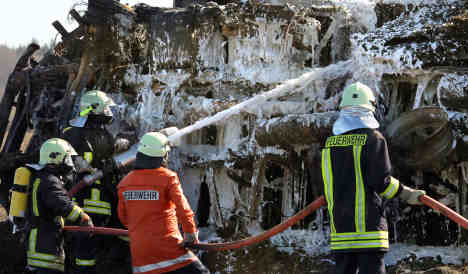 It was the most serious accident in Mecklenburg-Western Pomerania’s history.

NDR 1 Radio MV said at least 21 victims were still in the hospital and two were in critical condition.

German President Christian Wulff expressed his condolences for family members and the bereaved on Saturday and said he hoped the many people who were injured would recover quickly. He also thanked rescue workers for their efforts.

Strong winds blew sand and earth onto the four-lane A19 autobahn near Rostock in the state of Mecklenburg-Western Pomerania on Friday, severely hindering visibility for motorists and causing accidents in both directions.

Some 80 vehicles were involved in the pile-up, and about 30 cars and lorries caught fire. Police said the blaze may have been caused by chemicals in one of the trucks.

“There had not been abundant rain in the region for an extended period of time – that means the wind does not have to reach hurricane strength to produce sandstorms like this,” meteorologist Angela Richter said.

She added that winds at the site of the crash in Kavelstorf had been between 72 and 86 kilometres per hour. In areas further west, forest fire warnings have already been issued due to dry conditions.

“Storms like this are not rare in the north,” DWD spokesman Gerhard Lux said. “It was more a chain of unfortunate circumstances that led to the pile-up.”

The German Weather Service said the storm was, however, atypical in that it had pushed unusually far inland from the coast.

The A19 autobahn between Rostock and Güstrow was set to be reopened in both directions before the start of the week. Though there was no speed limit on that stretch of the roadway, drivers must now stay below 80 kilometres per hour.

Manfred Rathert from the state office for road construction and traffic said the autobahn toward Berlin could be reopened as early as Saturday afternoon. The motorway in the direction of Rostock was seriously damaged due by the extreme heat of the fire.