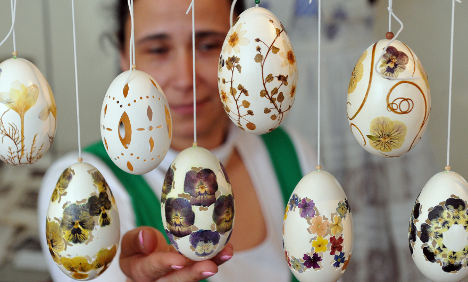 Mechanical monsters, big-eyed bubble heads, and wandering Teddy bears have taken over Berlin. Greet them respectfully on your 25-stop walk around Mitte, where galleries, from Dudes Factory to The Early Bird Hype are showing character art by a creative batch of internationals. Check the program for performances and parties.

“Radical Jewish culture” is Krakauer’s thing. As a member of the Klezmatics, he put a fresh spin on dusty old Yiddish tunes. He played John Zorn’s “Kristallnacht” in Munich. And his own band Klezmer Madness merges the Eastern European spirit with jazz and hip hop. The New York clarinetist performs at Berlin’s Jewish Museum, Wednesday.

The Art of Pop Video

When a new network called MTV launched in 1981 with The Buggles’ “Video Killed the Radio Star,” a new form of art was born. We won’t comment on the turn the music television channel has taken 30 years later, but we will say music videos rock! Cologne’s Museum of Applied Arts celebrates the medium with their new exhibition “The Art of Pop Video,” which begins Saturday. Just don’t expect to see any booty shaking among the works by Pipilotti Rist, Candice Breitz, Wolfgang Tillmanns, and others.

Tradition and Modernity – Classical and New Music for Japanese Instruments

The longevity of traditional Japanese instruments like the shamisen and the koto is impressive. These transporting stringed instruments date back to the early decades of the first millennium. On Tuesday, Ensemble Atarasii Kaze (New Wind) perform works by contemporary composers as well as those dating from the Edo period. Surrender to the music of Japan, if only for an evening.

German and Mexican musicians comprise the Berlin-based band Tee con Pikete. The quintet plucks out its Latino-acoustic-pop Friday in Frankfurt for what’s sure to be the feistiest tea party in town.

Hand painted eggs for as far as the eye can see. What’s not to love about Easter markets? Pick up a basket of aquamarine, tangerine, and cotton candy-hued orbs this weekend at Sasel-Haus. Pretty spring flowers and cute bunny things join the mix.

Hailed as “emotionally arresting and quite simply jaw-dropping” by the music website Boomkat, Alva Noto is one of electronic music’s most celebrated champions. Carsten Nicolai plays his Xerrox recordings as part of the Elbe Philharmonic’s ePhil series, Thursday.

Evelyne Axell – The Earth is Round

Evelyne Axell is one of the amazing people. A former actress and screenwriter, she began working in visual art in 1964 starting with paints before moving on to less traditional materials like aluminium and Plexiglas. The body of work she created before her death seven years later is astonishing. See a selection of the Belgian pop artist’s pieces that convey the essence of the 1960s and 1970s, at Hamburg’s Kunstverein, starting Friday night.

Five moustached Frenchmen are traipsing around Europe this spring in the folk pop outfit known as Syd Matters. Let Jonathan, Jean-Yves, Olivier, Remi, and Clement serenade you from the stage of Lothars alte Nähfabrik, Saturday night.

Nothing says spring like a field, vase, or a canvas full of flowers. And when said flowers are rendered in watercolour by one of the masters of German expressionism, even better. Because of their sensitivity to light, Emil Nolde’s watercolors are rarely shown. Munich’s Pinakothek der Moderne displays the Staatliche Graphische Sammlung’s collection of the artists’ vivid sunflowers, irises, pansies and poppies until May 15. By then, your own garden should be bursting with the eye-popping blooms.

Nearly 100 museums, cultural hot spots, and exhibition spaces stay open late Saturday for Stuttgart’s Long Night of Museums. Grab your ticket, pick a bus route and hop aboard. Kids can get in on the action too, with three routes devoted to the little ones.