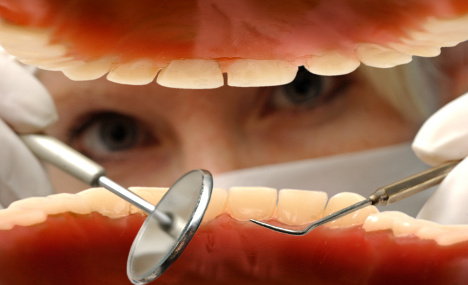 The Tooth Report 2011, released this week, found that 30 percent of people in Germany with health insurance go to a dentist less than once a year.

“When almost every third person doesn’t see their dentist regularly we really need to ask ourselves whether it is individual dentists that are the problem, or are more people becoming averse to private healthcare?” said Rolf-Ulrich Schlenker, vice president of Barmer GEK.

Men aged between 20 and 25 were particularly averse to dentists, with only 55% having gone in 2009 compared to 67% of women the same age.

On average though, a person in Germany visits the dentist just over twice a year and half of those visits are check-ups, putting Germany within normal range on international comparisons.

However, the study also noted a difference between people in the former east and west of Germany. Residents of eastern states Saxony and Thuringia make an average of 2.4 visits compared to 1.9 and 1.8 in western states Rhineland-Palatinate and Saarland.

The author of the study, Thomas Schäfer, explains that this may be partly due to there being a higher number of dentists in the east, as well as “the methods by which some were raised in the former DDR playing a role.”

Barmer GEK used data from 2009 on more than eight million of its members.