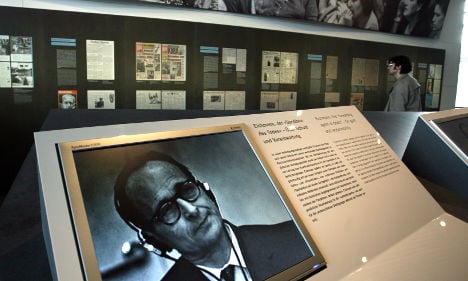 Organisers of a Berlin exhibition opening to the public Wednesday to mark the start of the trial on April 11, 1961 say Germany’s Bundesnachrichtendienst (BND) foreign intelligence agency refused access to the relevant files.

“We made a request to the BND around a year ago to be able to look at these files. The response was negative,” said Lisa Hauff, curator at the exhibition at the Topography of Terror museum.

This is “absurd” and “outrageous,” said Norbert Kampe, head of the Wannsee Conference memorial, which helped on the exhibition at the museum on the site of the Gestapo and SS’s former Berlin headquarters.

Eichmann was a key organiser in the deportation and murder of millions of Jews and others during World War II. He escaped from captivity and ended up, like many other war criminals, in Argentina in 1950.

After his capture by Israeli agents, he stood trial in Jerusalem and executed in 1962.

Freelance journalist Gaby Weber last year won a legal victory forcing the BND to make available some of its files, which it is now doing, but only step by step.

According to Der Spiegel magazine, they show that the BND, or rather its forerunner Organisation Gehlen, was aware as early as 1952 that Eichmann was in Argentina – eight years before his capture.

This is not that spectacular, observers say, but the BND’s reluctance to release these files, and the fact that it is still blocking access to others, has raised suspicions that it may be hiding more explosive secrets.

“I have seen some of the (released) files, and a great deal is blacked out. They are basically just trial documents with very few interesting things,” Weber told Deutschlandfunk radio this week.

The suspicion is that the government of chancellor Konrad Adenauer wanted to prevent Eichmann being captured in case he revealed highly embarrassing details about the pasts of high-ranking figures in the West German elite.

Eichmann’s kidnap came at a frosty time in relations with communist East Germany (GDR), which had long accused West Germany of rehabilitating old Nazis in high positions, and at a particularly tense period in the Cold War.

In 1961 the GDR erected the Berlin Wall and the CIA sponsored the doomed Bay of Pigs invasion of Cuba. The following year was the Cuban missile crisis.

“Bonn is on trial with Eichmann,” ran the headline of GDR newspaper Neues Deutschland, reporting on what it said was “panic” in Adenauer’s government.

The most prominent example was Adenauer’s chief of staff, Hans Globke, who had been involved in drawing up anti-Jewish legislation under the Nazis. Der Spiegel last month quoted CIA files as saying Bonn was “on the brink of hysteria.”

“Eichmann was like a walking bomb because he knew so much … and if he had spilled the beans he would have sent quite a few people into a spin,” Weber believes.

The fact that Eichmann in the event kept quiet on this aspect, and on other Nazis in Argentina, raises the suspicion that there was a “deal behind the scenes” between West Germany and Israel, Weber said.

Adding fuel to the fire are accusations that the West German embassy in Buenos Aires appeared to be well aware that Eichmann was in Argentina, despite its claims to the contrary after his capture.

“Every Nazi criminal on the run got their identity papers issued at the embassies, from (Josef) Mengele, the concentration camp doctor, to Eichmann. It cannot possibly be that … Bonn didn’t know about it.”

Eichmann’s sons applied for passports at the Buenos Aires embassy in 1954, using their real surnames and even putting as their father SS-Obersturmbannfuehrer (“SS Lieutenant Colonel”) Eichmann, reports said.

“There should be another ruling in the coming weeks that we hope will release most of the remaining files, if not all of them,” Weber’s lawyer Reiner Geulen said.

A spokesman for the BND, Dieter Arndt, declined to comment while Weber’s legal action was ongoing.