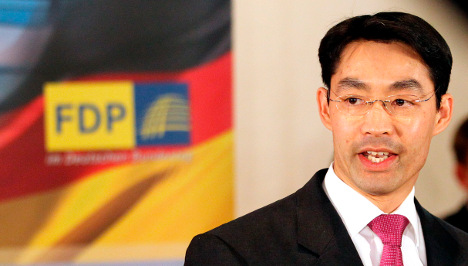 Rösler, 38, who was born in Vietnam and adopted by German parents, is the only declared candidate for the helm of the pro-business Free Democratic Party (FDP) after Guido Westerwelle said Sunday he was quitting after 10 years.

“I have been an FDP member for 19 years and have fought hard for liberal values with a great deal of joy and passion. Therefore I have decided to take on more responsibility for this party in difficult times,” he told reporters.

He said he would assume the role of Germany’s deputy chancellor if elected at a party conference in May and added he enjoyed “widespread support” from fellow FDP members.

“It’s about restoring credibility to the FDP. That will take time. It won’t happen overnight, but I am firmly convinced it will happen if we are decisive and work together as a strong team,” he added.

Westerwelle, who threw in the towel as party leader following a string of election debacles, would stay as foreign minister, he said, despite mounting pressure for him to resign this post as well.

In an editorial entitled: “The foreign ministry is not an old people’s home”, business daily Handelsblatt wrote: “Too bad for the party, but good enough for Germany?”

Merkel swept to a second term at the helm of Europe’s top economy largely on the coattails of the FDP, which secured a record 14.6 percent in federal elections in September 2009.

But the party has sunk to new depths in the polls, scoring roughly five percent nationally, the threshold for parliamentary representation.

The FDP failed to win seats in parliament in two of the recent regional elections and only just managed to do so in a third.

While the crisis within the FDP has shaken Merkel’s government, analysts say the coalition is likely to withstand the pressure and no major cabinet reshuffle is expected.

A heart and chest surgeon by training, Rösler embodies what has been billed as the FDP’s “new generation.”

He was adopted as a nine-month-old baby by a German couple from an Vietnamese orphanage and brought up by his adoptive father, a career military officer, as the couple split when he was just four.

Last year, he steered a disputed set of health reforms through parliament which increased the financial burden on patients in an attempt to address healthcare deficits.

He said he would stay at the health ministry despite speculation he would take over the economy ministry.

Another mooted candidate for the party leadership, Christian Lindner, would be his deputy, Rösler said.