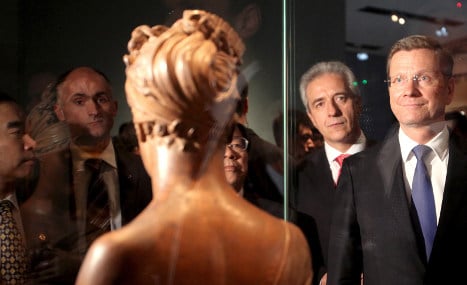 Despite China’s repressive treatment of artists, prominent German cultural figures have called for a continuing dialogue with the People’s Republic.

“I believe in dialogue even where there is strife,” Martin Roth, director of the Dresden State Art Collections, said. “That’s why I also work with Tehran.”

Goethe Institute president Klaus-Dieter Lehmann wants to use the exhibition, which has afforded Germany new cultural relevance in China, “to help spread the idea of the Enlightenment to the Chinese people,” he said.

Open since April 1st, “The Art of the Enlightenment” exhibition is a joint initiative of the Dresden State Art Collections, the Berlin State Museums and the Bavarian State Picture Collections.

All three institutions have been heavily criticised for exhibiting the art in China. But Roth rejected the public outcry.

“I am shocked by the reactions this topic has provoked,” he said. “If we can reach and educate even just a few people, it’s a valuable thing.”

Lehmann acknowledged, however, that the exhibition could be absorbed by the Chinese propaganda machine.

“I had hoped for far clearer rhetoric on the stage in Beijing than the words that met Foreign Minister Guido Westerwelle [at the exhibition’s opening],” he said, referring to Westerwelle’s China visit last week.

In light of recent demonstrations in China similar to the protests sweeping the Middle East, the Chinese government has arrested scores of lawyers, writers and activists since February.

Among those is world-renowned artist Ai Weiwei, whose arrest brought international criticism and demands for his immediate release.

The Bundestag committee on foreign cultural and education policy on Tuesday called the recent events “a political scandal and a snub to cultural co-operation between Germany and China.”

Ai Weiwei himself talked with the daily Süddeutsche Zeitung about the conflict in an interview last week.

“Recently they’ve been throwing more and more people into prison, simply for writing something on Twitter or on a blog,” he said. “Their telephones are disconnected, they are followed, their apartments get raided,” and innocent people are given prison sentences, he added.

Weiwei also had thoughts on the site chosen for the exhibition.

“Tiananmen Square is the most ironic location in the world for an exhibition about the Enlightenment,” he said, “because we Chinese are currently living in an era of darkness.”

Despite China’s economic boom, Weiwei added, in matters concerning the freedom of speech, creative expression and parenting, China has “arrived at a new low point.”