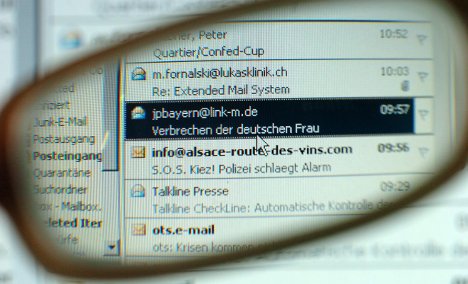 Germany is “the preferred logistical standpoint from which to spread viruses, phishing e-mails or spam,” the report said.

A total number of 473,480 “bots,” malware designed to spread spam or viruses online, were found in Europe by experts from the online security provider in 2010, of which one in every five came from Germany.

For the popularity of phishing scams, where scammers masquerade as institutions such as banks in order to obtain confidential data, Germany climbed from sixth place to second behind the UK. In terms of use of Trojans, malware that can steal vital data from the users’ hard drive, Germany moved from fifth to second place.

The report also found that the strength and frequency of cyber attacks has seen a marked increase from previous years, focusing more on abusing social networking sites such as Facebook.

The methods used by the attackers have also become more sophisticated, employing shortened URL code via e-mail or websites to spread malware or spyware.

The report compared internet security in Europe, the Middle East and Africa.