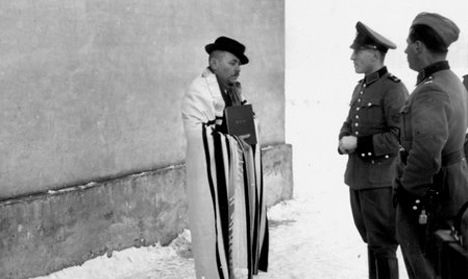 In the decades following the Second World War, thousands of former police officers for the Nazi regime slipped back into their country’s civilian workforce with impunity, their crimes lost to history.

Now, building on over 30 years of research, the new exhibition, “Order and Annihilation – The Police and the Nazi Regime,” sets the record straight on the crimes of the police work in that era.

“The police had various functions and responsibilities in the Nazi state,” continues a placard at the exhibition, “and as a general rule, police officers dutifully performed their given tasks – be it traffic control or mass executions.”

The 1945-46 Nuremberg Trials indicted scores of high-ranking Nazi officials, but a majority of police officers, war criminals themselves, escaped justice and were never held accountable in court.

The global public knew little about the role of the police for several decades after the war, but the DHM exhibition delves into the gritty details. It tracks the lifespan of the force from its right-leaning origins in the Weimar Republic to its use as an instrument of terror during the Third Reich, to the eventual return of thousands of former Nazi officers to police forces across both East and West Germany.

During the war, according to the exhibition, the 355,000 men and women serving in the police force methodically carried out their duties of registering, collecting and exterminating undesirable groups in occupied territories. These were not just officers of the infamous Gestapo, but belonged to all branches of the police.

Even without any official punishment for the refusal to carry out an order, few officers abstained from their role in the killing, imprisonment and forced labor of millions of civilians in occupied territories.

“The manuscripts, the photos and videos the museum has compiled are disturbing, but also compelling and I think important to see,” said Werner Hinrich, a history professor visiting from Potsdam.

“We’ve known about the crimes for a few years now,” he added. “But it’s important to remember and revisit the past, always, so we can make the future better.”

Almost as unsettling as the crimes themselves was the re-employment of former Nazi officers in German police forces – including those administered by the Allied powers occupying West Germany.

One section of the exhibition tells the story of former SS officer Julius Wohlauf, a “good example” of a police officer, who took up a job as a salesman immediately after the war in 1945, before rejoining the Hamburg police force ten years later.

In all, he lived and worked freely for nearly two decades until he was brought to trial for war crimes in 1963, and sentenced in 1968 to eight years in prison for complicity in the murder of 9,200 people during the war.

The curators postulate that Wohlauf, alongside many officers like him, participated in the Nazi scheme for various reasons – out of “blind obedience, vocational ambition, ideological schooling, peer pressure and racism,” but also out of “sadism and personal gain.”

Despite such an explanation, the motives behind the police crimes during the Nazi era remain difficult to understand. But the new exhibition goes a long way in exposing a history that remained hidden for many years.

“Order and Annihilation – The Police and the Nazi Regime” runs until July 31 at the German Historical Museum in Berlin. Guided tours are also available.