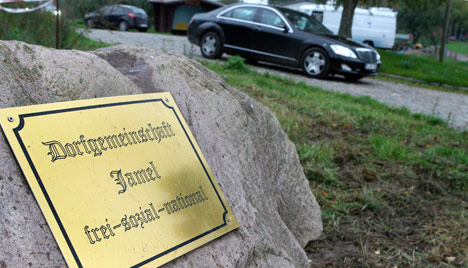 Until recently a sign at the entrance to the village said visitors had arrived at the “community of Jamel: free, social, national,” evoking the National Socialists or Nazis.

A wooden signpost pointed the way to Braunau am Inn, the Austrian birthplace of Adolf Hitler.

A campaign poster for the far-right NPD party is one of the first things visible in the hamlet of 10 or so tumbledown houses. Around six of these houses are home to neo-Nazis, said Birgit and Horst Lohmeyer, a couple fighting a high-profile campaign to tell the world about Jamel.

“They have all painted their houses the same colour: a sort of reddish-brown,” she said in her farmhouse kitchen.

The Lohmeyers moved here from Hamburg, Germany’s second largest city and main port, in 2004, hoping to swap urban life for their dream of a rustic farmhouse in an idyllic country setting.

But that dream turned swiftly to a nightmare as far-right extremists moved to the village.

“We knew that a famous and convicted far-right extremist, Sven Krüger, lived here with his mother and sister, but we moved here anyway. We were convinced we could deal with it,” said Birgit.

“Since then, the situation has gotten a lot worse. More of Krueger’s far-right buddies have moved into the village. They see the village as theirs and they treat it as such. The atmosphere is one of extreme hostility.”

The couple has heard reports of children greeting each other with Hitler salutes. They have themselves heard neo-Nazi songs ringing out into the street – “Adolf Hitler is our Führer.”

The Krüger in question is a senior NPD member and owns a demolition firm in nearby Grevesmühlen whose company logo shows a man smashing what seems to be a Jewish Star of David.

“We’re the boys for the dirty work,” is the firm’s slogan.

“Authorities found a machine gun and 200 rounds of ammunition. He is now in custody,” said Stefan Urbanek, a spokesman for prosecutors in nearby Schwerin, capital of the state of Mecklenburg-Western Pomerania.

Since that raid things have begun to change in Jamel. The “national” sign disappeared, the directions to Hitler’s birthplace were taken down.

“We don’t know if it was the authorities or Krüger’s men,” said Birgit.

Repeated efforts to contact Krüger were unsuccessful and an approach to one of the brown-red houses in the village was met with a volley of insults. Krüger’s Grevesmühlen office is protected by barbed wire, fierce guard dogs and a watchtower, complete with searchlight.

Back in Jamel, the Lohmeyers said they suffer from what they call a “constant, latent threat.” People hiss “piss off” over the fence. But they are uncowed and decided to fight back. Every year they hold a large music festival “for democracy,” attended by a few hundred people. Last year, far-right sympathisers infiltrated the concert and broke someone’s nose, they said.

They have received much unexpected recognition for their lonely stand. German President Christian Wulff has invited them to Berlin to tell him their plight and they won an award from the Jewish community for civil courage.

“With their extremely courageous stance in Jamel, they are not only giving a brave signal in the fight against far-right extremism, but also encouraging others … not to give up,” said Dieter Graumann, head of the Central Council of Jews in Germany.

Still, the question remains. Why live in constant fear in such circumstances?

The answer is simple. The Lohmeyers see themselves as a bulwark against a creeping extremism they believe is becoming widespread in their part of eastern Germany.

“The problem in Jamel is actually not what we consider the biggest problem. The real problem is that the whole region is being overrun by far-right extremists … Jamel is just a microcosm of the issue,” said Birgit. “They are slowly taking over small places like Jamel and infiltrating them with their ideology,” she said.

And despite the fear and the unpleasant atmosphere in the village, it has become a point of principle for the pair.

“Leave now? What sort of sign would that be for the right-wingers? Of course we’re not leaving,” said Birgit. “This fight continues.”