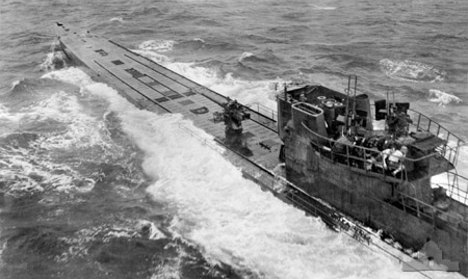 A Nazi U-848 in the south Atlantic. Photo: Wikipedia Commons

The Germans planned to bomb roads, railways and factories on “Operation Pastorius” in June 1942, according to new details in files from Britain’s MI5 domestic intelligence agency.

But even before it got under way the plot descended into a farce worthy of a comedy film.

One of the saboteurs, Herbert Haupt, got drunk in a Paris bar after a farewell dinner and declared to his drinking companions that he was a spy.

When the submarine arrived in the US, it ran aground on a sandbar as it dropped off the four agents on the coast of Long Island, New York.

A US coastguard discovered the Germans as they buried their supplies on the beach – but he was given $300 and persuaded to leave the men alone.

In a report on the mission, Victor Rothschild, head of MI5’s counter-espionage division, wrote: “It was only owing to the laziness or stupidity of the American coastguards that this submarine was not attacked by USA forces.”

The plot was only foiled when the leader of the spies, George Dasch, rang up the FBI, announced he was a saboteur and demanded to speak to the bureau’s then director, J. Edgar Hoover.

His confession was initially dismissed but after a lengthy interview he was arrested and his fellow agents were rounded up, the files showed.

Despite the clumsiness of the mission, MI5 still regarded it as a serious threat.

“This sabotage expedition was better equipped with sabotage apparatus and better trained than any other expeditions of which the security service has heard,” Rothschild wrote.