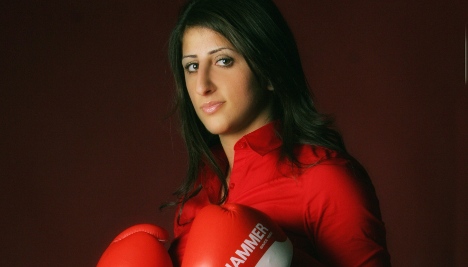 Roy El-Halabi, who was also his stepdaughter’s manager until she sacked him in January, burst into the champ’s dressing room at the Berliner Trabrennbahn and shot her in the right hand, the left knee and both feet, news reports said.

The shooting happened just minutes before Rola El-Halabi was to fight for her third world title. She had sacked her stepfather as her manager in January after the pair fell out over the boxer’s new boyfriend.

She was warming up, her boxing gloves already on, just 10 minutes before her bout against Bosnian Irma Adler, when her stepfather burst into the room. Roy El-Halabi also shot two guards, both of whom are recovering in hospital.

The boxer had five operations over the weekend. Her promoter, Malte Müller-Michaelis told sports news wire SID: “Her operation went smoothly, but the shots were intended to end her career and it seems almost certain that that will happen.”

Rola El-Halabi told daily Bild: “Then Dad stormed in with a pistol, forced everyone out of the room and locked the two of us in. He shot me right away from three metres away in the right hand. It burned like hell and I screamed. But he kept shooting, next in my left foot, and I fell down, twisting my knee.

According to the boxer’s account, her stepfather yelled, “You’ve ruined my life.”

Rola El-Halabi replied, “Dad, calm down. We can talk.”

She continued: “While I was crumpled on the floor, he aimed at my knee, then the other foot. Each shot was like a punch. More and more blood was coming out of my shoes. It made me dizzy.”

Roy El-Halabi then turned himself over to the police at the scene. As he was taken away, he called, “Rola, Rola, please forgive me!”

His stepdaughter shouted back, “I hate you.”

Rola El-Halabi was undefeated from 11 fights with six knockouts and has held two world titles in her career. Her bout Friday night was part of a comeback after a break from boxing.