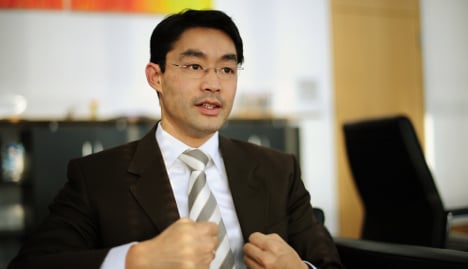 In the wake of Guido Westerwelle’s announcement Sunday evening that he would step down as party chairman, the Free Democratic Party (FDP) was moving quickly to regain momentum with a quick announcement of a new leader.

If chosen by his party, Rösler would also become vice chancellor in the coalition with Chancellor Angela Merkel’s Christian Democratic Union.

The new FDP chairman will need to work hard to turn around the party’s ailing fortunes following recent drubbings in key state elections.

Several media organizations reported Monday morning that Rösler was the likely choice to succeed as chairman. However the party’s general secretary, Christian Lindner, who is Rösler’s main rival for chairman, announced at midday that the issue would not be decided until Tuesday morning.

“We have not specifically talked about this question,” he said.

Westerwelle announced Sunday evening he would quit as leader of the FDP next month but stay on as Germany’s foreign minister. He conceded Monday morning that if his successor were a member of cabinet, as Rösler is, that person would also become vice chancellor.

”It is absolutely clear that the next party chairman, if he is a member of the cabinet, will also become vice chancellor,” he told the party’s leadership, according to various news reports.

However questions are likely to be raised about Westerwelle’s demand to stay on as foreign minister – a role traditionally held by the leader of the junior coalition member.

The most widely considered alternative to Rösler is general secretary Lindner, 32, who is not a member of the cabinet.

The opposition Social Democratic Party (SPD) and Greens are set to go for the jugular on the issue of Westerwelle’s cabinet position, arguing that he is no longer plausible as foreign minister.

“Mr. Westerwelle must be asking himself whether he still has enough strength to fulfil the office of foreign minister,” the centre-left SPD’s foreign spokesman Rolf Mützenich told business daily Handelsblatt.

On Sunday evening Westwelle told reporters: “After 10 years as party chairman, I will no longer stand for the office at the next party congress in May.

“It is an exceptional day for me personally but I am sure that it is the right decision, also to ensure a generational change in the FDP.”