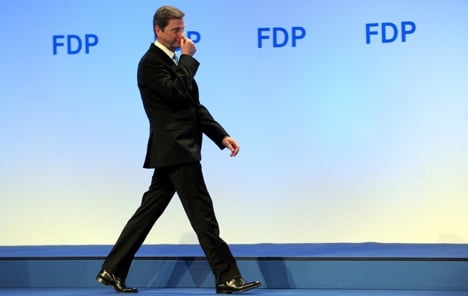 “After 10 years as party chairman, I will no longer stand for the office at the next party congress in May,” he said after days of speculation about his impending resignation as FDP chief following a series of poll debacles.

Westerwelle, 49, who is also German leader Angela Merkel’s vice chancellor, did not announce the name of his likely successor or take questions from reporters.

He said he had made the decision earlier Sunday after returning from a trip to China and Japan and speaking with top party officials “and others.”

“It is an exceptional day for me personally but I am sure that it is the right decision, also to ensure a generational change in the FDP,” he said.

Possible successors at the helm of the pro-business party, which has served as kingmaker in most German governments since World War II, include Health Minister Philipp Rösler, 38, and FDP general secretary Christian Lindner, 32. The party leadership is to meet Monday morning.

The sharp-tongued Westerwelle, post-war Germany’s most unpopular chief diplomat according to polls, has widely been seen as a millstone around the neck of the FDP, which he has led since 2001.

The pressure on Westerwelle grew in the last month after the FDP failed to clear the five-percent hurdle for representation in two state elections in Saxony-Anhalt and Rhineland-Palatinate and barely squeaked into Baden-Württemberg’s legislature.

Although Westerwelle shepherded the party back into government in 2009 after 11 years in the political wilderness, critics say he has an abrasive personality far better suited for sniping from the opposition benches.

The party has seen a free fall in support starting soon after it joined Merkel’s coalition 18 months ago due to bitter infighting in the government over health care, energy and tax policy – the FDP programme’s main plank.