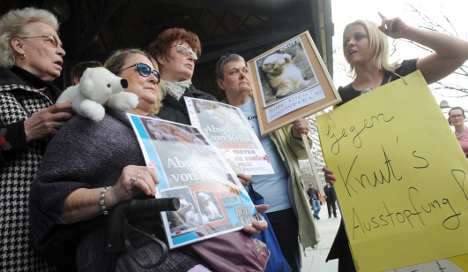 The small group lit remembrance candles and decorated the zoo’s external fence with flowers and home-made cards and placards with photos of the bear and slogans calling for his body to be buried.

Some even released white balloons to signal their protest. “Our primary aim is to hinder the stuffing of Knut,” said Jochen Kolbe, one of the organisers.

He said Knut had not “deserved” such treatment. Others at the demonstration claimed they had realised for weeks before his death two weeks ago that he was not well.

Christina Keuk said she could not understand why the zoo authorities had not intervened and added that Knut had not got on well with the three other polar bears at the zoo, Tosca, Nancy and Katjuscha. “Any visitor could see that,” she said.

She said she had regularly visited the zoo in the last four years since Knut was born and raised by hand, becoming a huge attraction. “I will never enter this zoo again,” she said.

Many of the demonstrators held zoo director Bernhard Blaszkiewitz personally responsible, with one placard bearing the words, “Herr Blaszkiewitz, you are a joke, stuff your heart and brain.”

The bear died on March 19 after what an autopsy showed was a virus infection and severe inflammation of the brain. The zoo intends to preserve his body and put it on display.