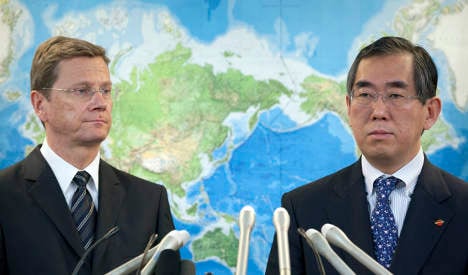 Yet the political meltdown of his Free Democratic Party (FDP) continues in Germany, with calls for Westerwelle’s departure and the accompanying power struggle becoming clearer and louder by the day.

The embattled party leader will return on Sunday. One member of the FDP executive committee told Focus magazine he expected Westerwelle to announce to a party leadership meeting on Monday that he would not stand for re-election as leader.

Westerwelle would try to retain his position as foreign minister and vice chancellor, the source said.

But another source from Westerwelle’s circle dismissed this. “There is neither a decision nor a pre-decision on an alleged resignation,” he said on Friday afternoon.

Yet media speculation on Westerwelle’s future and those supposedly lining up to replace him and reinvigorate the struggling party continued apace over the weekend.

FDP vice chairman Cornelia Pieper herself resigned, increasing the pressure on Westerwelle to do the same. “I am making the way free for a new start with new heads – which can be followed by others,” she said, while calling for the party to renew itself.

Westerwelle’s predecessor Wolfgang Gerhardt called for Westerwelle to resign, saying he could not save himself from being voted out at the party conference in May.

“Delegates are definitely travelling to the party conference in order to elect a renewed personnel,” he said.

Although party General Secretary Christian Lindner and Health Minister Philipp Rösler are being suggested as successors to Westerwelle, there is resistance to this idea too.

“The club of 30-year-olds cannot take over the party. They must prove themselves in their positions,” said Uwe Barth, member of the party’s federal leadership as well as head of the FDP in Thuringia.

Lindner told Focus the FDP was now starting a process of renewal which was “regrettably necessary.” The party was about to change its personnel and was considering some themes anew, he said.

The FDP was trounced in state elections last weekend. It was pushed out of the Rhineland-Palatinate state legislature and lost government in Baden-Württemberg, intensifying the pressure on Westerwelle.