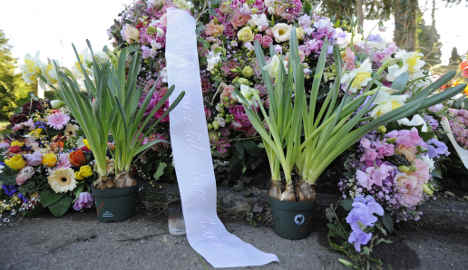 Grave of the girls. Photo: DPA

The 50-year-old uncle of the sisters Chiara and Sharon was arrested on Friday after DNA tests linked him to the flat in Krailling where the eight- and 11-year-old girls were killed.

Although there were inconsistencies between his first and second interrogation, the uncle had not admitted their murders, said Markus Kraus, head of the murder commission in Munich on Saturday.

The suspect had made a “distanced and disinterested impression,” he added.

The two girls were killed in their unlocked home in the small Upper Bavaria town while their mother was out. The post-mortem reports showed they were both subjected to “many violent acts of different kinds,” using a knife and part of a barbell. There was no indication of sexual abuse.

The girls were buried on Friday.

The 31 members of the murder squad had checked 141 potential clues which had come in from the public, as well as interviewing 100 people, and testing 91 saliva samples which had been given voluntarily from local people.

The DNA samples linked the 50-year-old uncle to the flat and led to his arrest. Kraus said on Saturday that the killer had seemingly injured himself during the attack and left a blood trace at the scene.

The public prosecutor said charges of double murder would most likely be made against the man on Saturday. Spokeswoman Andrea Titz would not comment on a possible motive, but media reports said the man, himself a father of four, had argued with the girls’ mother over financial matters.