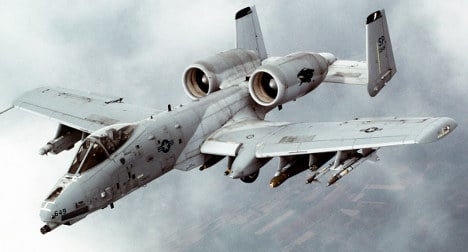 A file picture of an A-10 over Germany. Photo: US Air Force

The slow-moving A-10 Thunderbolt II, which is used for close air support, was not carrying missiles, according to a police spokesman in Trier.

But the plane, commonly known by its “Warthog” moniker, did have 1,100 rounds of live ammunition for its cannon on board.

The fire brigade, the police and a rescue helicopter all rushed to the crash site, which was only 300 metres from the village of Laufeld.

“We narrowly avoided a catastrophe,” said Karl-Josef Junk, the mayor of the 500-person hamlet.

A spokeswoman for the US airbase Spangdahlem said the jet was stationed there and had been on a routine training flight when it suddenly crashed for still unknown reasons around 4 pm.