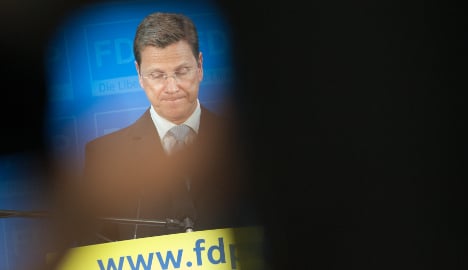 Westerwelle plans to remain vice chancellor and foreign minister in Angela Merkel’s centre-right coalition, but could step down from his job as FDP chairman as soon as Monday, various news sources reported.

Health Minister Philipp Rösler or FDP General Secretary Christian Lindner are seen as the most likely choices to replace Westerwelle, though Justice Minister Sabine Leutheusser-Schnarrenberger might also be a candidate.

The executive committee of the pro-business FDP is due to meet on Monday for three hours. Typically the meetings for the leadership run only about 90 minutes.

Westerwelle had originally been scheduled to tell the executive committee on April 11 whether he planned to run again as chairman at the party’s annual conference in mid-May.

But since the party’s woeful performances in state elections at the weekend – being swept out of the Rhineland-Palatinate state legislature and losing government in Baden-Württemberg – pressure has mounted on Westerwelle to reconsider his position immediately.

“The April 11 date is now out of the question,” a senior party figure told Der Spiegel.

Daily Frankfurter Allgemeine Zeitung quoted a party figure saying that it was not a question of whether Westerwelle would have to step down, but “rather a question of who’s going to tell him.”

The issue is no longer purely one for the FDP. It is feared that the ongoing internal battles and the leadership’s estrangement from the FDP state branches could paralyze Merkel’s government.

“The current situation is damaging our ability to govern. We cannot afford that,” a party figure told Der Spiegel.

After leading the FDP to historic success at the last federal election in 2009 with nearly 15 percent of the vote, Westerwelle’s fortunes have steadily declined ever since. He was under pressure even before the weekend’s state election debacle.

So far Westerwelle has not commented publicly on speculation about his future as party chairman. He returns to Berlin on Sunday from a visit to China.