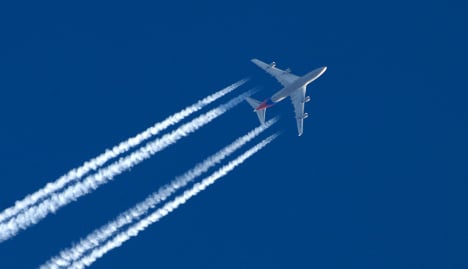 Experts at the German Aerospace Centre (DLR) calculated that the white lines of vapour left by aeroplanes, knowns as contrails, contribute to high-altitude cirrus clouds, which trap heat.

“Aircraft condensation trails and the clouds that form from them may be causing more warming today than all the aircraft-emitted carbon dioxide (CO2) that has accumulated in the atmosphere since the start of aviation,” the journal Nature Climate Change, which published the study, wrote in a commentary.

More than a century after the Wright brothers pioneered fixed-wing flight around the beginning of the 20th century, aviation is today responsible for about three percent of all fossil fuel carbon dioxide emissions.

But the new study by Ulrike Burkhardt and Bernd Kärcher of the DLR found that the total warming effect of contrails and the cirrus cloud that results from them was 31 milliwatts per square metre at any given time – more than the 28 milliwatts resulting from all the accumulated carbon dioxide from aviation.

The line-shaped contrails are formed when hot, moist air coming out of the engine mixes with cold air in the atmosphere. When it is very cold and these form small ice particles, the contrails can spread to form cirrus cloud, which can warm the atmosphere.

Burkhardt and Kärcher developed a model of how these man-made clouds form, grow and spread.

The findings could help scientists develop ways to combat the effects of aviation on climate change, wrote Olivier Boucher of the Met Office Hadley Centre in Britain, in an accompanying commentary.

For example, flight paths could be altered to avoid parts of the atmosphere that were cold enough for spreading ice drops to form, though this was likely to use more fuel, offsetting the benefits.

Or it could help in the development of a new kind of engine that condenses water vapour before it leaves the aircraft so that it falls the ground as ice crystals.