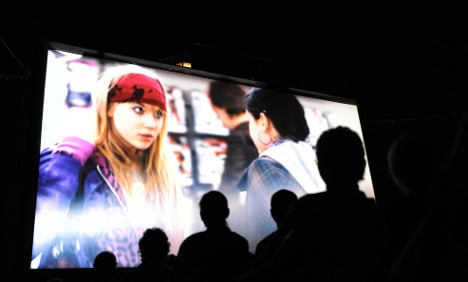 One of the unique aspects of the Berlin International Film Festival is the Berlinale Talent Campus, a sort of residency for young, promising filmmakers to work on their projects. This week a selection of shorts and full-length feature films by Talent Campus alumni are being shown at Berlin’s Kino Arsenal. Several screen in their original English language version, or with English subtitles.

“It’s a world of laughter a world of tears,” it’s also a world of harpsichord, vocals, and electronic music. French composer Frédéric Acquaviva has created an eight-part recording that will be played in eight different cities around the world, beginning Friday night at 5pm GMT (that’s 6pm for us here in Germany) and Berlin is one of them. The eight-hour event takes place at the Friedrichshain gallery Complice.

Synchronisation seems to be a theme this week. Berlin’s Ensemble Adapter and the Hong Kong New Music Ensemble play new works together by composers Paul Friedrich Frick and LAM Lai in their respective cities this weekend. But how, you might be wondering, can these two groups play together when they’re thousands of kilometres apart? A little thing called the World Wide Web facilitates.

An unconventional psychologist, a gang of mutant children, and an institutionalized wife. The Brood is classic Cronenberg. Fans should head to the Cologne Film House Wednesday night when the 1979 sci-fi thriller is shown as part the Kino’s “Something Weird Cinema” series.

From There Out – New Art from Belgium

Mingle with some Belgians Friday night in Cologne. Galerie Nagel’s new exhibition features 14 artists from this fabled land of waffles and Chimay.

Expressionism in the Rhine-Main Realm

Ernst Ludwig Kirchner, Max Beckmann and Alexej von Jawlensky are counted among the heroes of expressionist painting. Frankfurt’s Museum Giersch features works by these pioneers as well as 56 other artists who were active in the Rhine-Main region between 1908 and 1944, in their a new exhibition, which begins Sunday.

Hyun-Sook Song, who was born in Korea and studied at the College of Fine Arts in Hamburg, titles her paintings based on the number of brush strokes that swept across the canvas in the process of creating them. Stop by the opening of a new exhibition at Galerie Gabriele Von Loeper Thursday, to see her pictures and paper works.

Jazz Lines, one of Germany’s most fun festivals for new and improvised music continues through Sunday in Munich. See Beat Furrer conduct the Munich Chamber Ensemble through Lutaslawski, or watch a film portrait of jazz guitarist Fred Frith, Thursday night. On Friday, pianist Bojan Z takes the stage at Muffathalle, followed by a performance of The Adventures of Prince Achmed, an extraordinary silhouette film with live music.

DJs Gilbert Cohen (Gilb’R)and Nicolas Chaix (I:Cube) merge their varying influences and styles to create an irresistible amalgam of disco, house, dub, and straight up beautiful beats. Hit the dance floor at Bob Beaman Club Friday when the French duo man the decks for a three-hour back to back set with Benjamin Roeder.

Kids can hear readings and lectures by renowned authors and illustrators, go on literary excursions, and take workshops on editing and publishing this week in Munich. Drop your little readers off at the Munich City Museum where they’ll encounter a vast world of children’s literature at the Munich Book Show Junior.