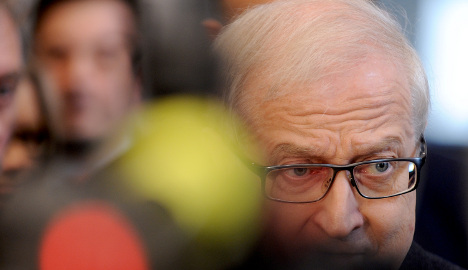 His remarks came as the internal battle over the party’s direction – and particularly the future of FDP chairman Guido Westerwelle – intensified.

Brüderle blasted what he considered hasty talk of a quick shut-down of atomic energy in Germany – putting himself clearly at odds with both Chancellor Angela Merkel as well as members of his own party.

“The energy transition must continue, but it must be manageable and certain,” he told daily Bild.

He said his pro-business Free Democratic Party wanted to move into the era of renewable energy as quickly as possible. “But we must be honest with people: it won’t work without new pathways, and probably also not without cost.”

But Justice Minister Sabine Leutheusser-Schnarrenberger supported FDP General Secretary Christian Lindner on the issue. Lindner had previously provoked criticism for suggesting that the eight oldest reactors in Germany to be permanently taken off-line.

Leutheusser-Schnarrenberger told the Mittelbayerische Zeitung: “He is not getting ahead of himself on this issue.”

She also said her party had a credibility problem.

“We can’t shove everything onto the nuclear catastrophe in Fukushima,” she said. “If the FDP is looking for answers … it has to keep in mind that we were already in a difficult situation before.”

But the party is also facing simmering internal criticism of its leadership, notably chairman Westerwelle as well as Brüderle. Katja Suding, leader of the party in Hamburg, told the Hamburger Abendblatt the FDP needed an overhaul – and pointedly named general secretary Lindner as a potential leader.

“Christian Lindner certainly has the potential to one day become party chairman,” she said.