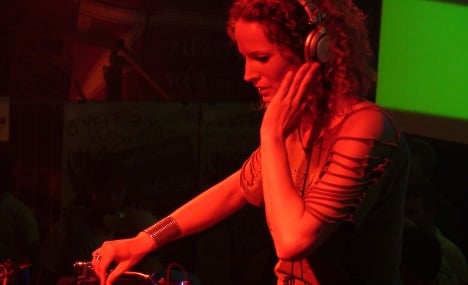 In Berlin, techno music is more than just a party scene, it is part of what makes the city great. German DJ Paul van Dyk famously credited the spread of techno with helping to unify the city in the 1990’s following the fall of the Wall, and since then Berlin has established itself an epicentre of techno music.

While there are women DJs in the city – big names such as Suzi Wong or Electric Indigo have headlined for years – at the heart of the industry remains what they say is a “boys club.” The situation is perpetuated by the cliché of the techno DJ as an overgrown nerdy boy, making it difficult for women DJs to get noticed.

DJ Kritzkom, a.k.a Marine Druont, has been living and spinning records in Berlin since 2007. She says there is no shortage of female talent, but women fight to headline at larger venues.

“In smaller places there’s no problem, but with the larger record labels and PR companies things can be a struggle,” she says.

Camea Hoffman, or DJ Camea, admits the scene has been criticised for being a “boys club,” but adds that women shouldn’t be discouraged.

“It can be a bit frustrating at times, but it just means we want to work harder to change their perspective,” she says. “It doesn’t define me and on a day to day basis it doesn’t really affect me … but I would be lying if I said I didn’t notice things that could be improved upon.”

The stripped-down style of techno may have lent itself to a more macho image than other forms of electronic music, but Hoffman insists women bring something special to the dance floor.

“People sometimes respond better to a female DJ in a club atmosphere than they do to a man,” she says. “It’s warmer and more expressive. Men can sometimes be a little too clinical.”

Hoffman explains that being a successful DJ is about understanding the audience, something that women are particularly good at.

“If you don’t have the ability to identify what people want, they won’t get into the set and it clears the dance floor – you have to be an emotion reader, a people-reader,” she says.

While any DJ has to think about their appearance, male DJs are afforded more freedom when it comes to public image, the women say.

Those who want to make it big in techno must craft an image which is accessible, but still non-threatening.

“People assume if you’re pretty that that’s why you got booked…but you also have to be careful not to look too sexy or you’ll get put into the wrong category,” says Monika Kruse, widely regarded as one of the most successful German techno DJs.

“A girl DJ will get attention more easily, because she is special,” Kruse adds. “But you have to prove yourself, show that you’re doing it for a love of music. Not just get their attention, but earn their respect.”

Some people assume that good-looking women get jobs because of their appearance, she explains.

“It’s the same kind of prejudice that exists in a lot of areas.”

For any DJ, choosing to set up a record label can be the most straightforward way to craft their public image, showcasing their own tastes while promoting their name.

But for Berlin’s women DJs, starting a label is also a way to break into the scene without relying on male-dominated outfits. Females are also finding ways to circumvent the industry when it comes to press coverage, which is especially important as more music media, such as Resident Advisor, sets up in Berlin.

“Nowadays having a record label is crucial to keeping your standing in the industry,” says Kruse, who founded her label Terminal M in 1999.

Hoffmann, who also owns her own label, Clink Recordings, agrees.

“This is definitely not a talent issue because there are so many amazing women doing things in electronic music right now, it‘s simply a publicity issue,” she says.

All the challenges aside, these women aren’t fixated on the nature of the industry they are working in. Just like their male counterparts, they’re interested in the music.

“For the most part I am just focused on my work and loving what I do,” says Hoffmann.