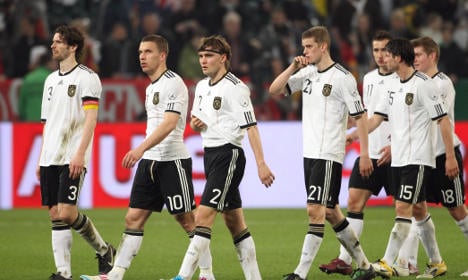 After Germany striker Mario Gomez had put the hosts ahead, two goals in two stunning second-half minutes by Blackpool midfielder David Carney and a penalty from Dynamo Moscow’s Luke Wilkshire floored the Germans.

This was Australia’s first win over Germany after three straight defeats, the last of which came in Durban last June when the Germans hammered the Socceroos 4-0 in their opening game of the South African World Cup.

Germany coach Joachim Löw was punished for naming a weak side with the most embarrassing defeat of his four-and-a-half year tenure in charge.

“That is a little unfortunate,” admitted Löw. “In the first-half, I thought the young players actually did quite well. But in the second-half we threw the game away.”

For Australia’s German coach Holger Osieck, who took charge last August and steered his side to the Asian Cup final in January, this was arguably his country’s biggest win on a football pitch.

“It would have been presumptuous before the game to believe that we could win,” said Osieck, who was Germany’s assistant coach when they won the 1990 World Cup title in Italy.

“In addition, I know the German team very well and know their quality. We just wanted to put in a good account of ourselves. We had a few weak points in the first-half and lost the ball too quickly. But we just got better and better in the second half.”

Each side began the match with just four survivors from those who started in Durban.

Galatasary’s Harry Kewell, 32, led the Australian attack with the Socceroos captained by Turkish teammate Lucas Neill, 33, to bring experience to the Australian side with Fulham’s Mark Schwarzer, 38, in goal.

Everton midfield star Tim Cahill was ruled out with a foot injury.

Dortmund pair Mats Hummels and Marcel Schmelzer, plus Andre Schürrle of Mainz were included in a experimental Germany side.

After a dull start, the highlight of which was an early yellow card for Australia’s Mile Jedinak for a foul on Christian Träsch, the hosts took the lead when Bayern star Mario Gomez capitalised on a neat pass.

Having been set up by Schürrle, Gomez slotted home on 26 minutes from the edge of the penalty area.

It was a subdued and sloppy first-half from both sides with countless opportunities wasted and the game badly needed a spark.

It came with a roar when Carney burst his way through the German defence and poked his shot past diving Germany goalkeeper Tim Wiese on 61 minutes to equalise.

Träsch then fouled Kewell in the area and French referee Stephane Lannoy pointed straight to the penalty spot on 63 minutes to hush the home crowd as Wilkshire slotted home.

Löw threw on veteran striker Miroslav Klose soon after to try and save his team’s blushes, but it was too late and Germany lost.