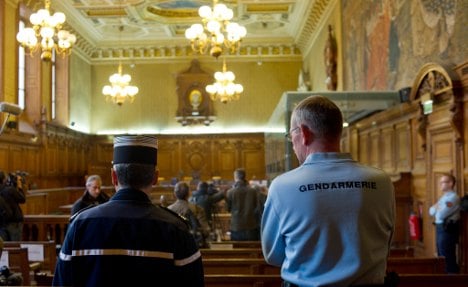 Dieter Krombach, 75, entered the Paris courtroom on crutches, preferring not to look at Andre Bamberski, 73, who has spent 29 years trying to get justice for his 14-year-old daughter, Kalinka.

A French court already in 1995 convicted the doctor in absentia of manslaughter over the death of Kalinka, his stepdaughter, who died at his home near Lake

Constance in 1982 after he gave her a mysterious injection.

“We’re here to fight, we will fight to the end,” Krombach’s lawyer, Philippe Ohayon, told journalists before the start of the new trial.

“The possibility of being tried is unbearable for Mr Krombach but he won’t escape this time,” said Laurent de Caunes, a lawyer for Bamberski who is a civil party in the case.

“Today something is happening that he’s wanted for years,” said Bamberski’s other lawyer, Francois Gibault, with his visibly emotional client declining to make any statement.

Bamberski was arrested in 2009 in Mulhouse near the German border after tipping off police about the whereabouts of Krombach, found in a doorway near the city’s courthouse, tied up and bleeding from a head injury.

Berlin had refused to hand him over on the grounds that he was tried and acquitted in Germany, but Bamberski spent two decades trying to have him sent to jail, convinced that he drugged Kalinka in order to rape her.

Charged with kidnapping, assault and criminal conspiracy, Bamberski has said that he gave the go-ahead for the kidnap and would suffer the consequences.

Questioned after Kalinka’s death in 1982, Krombach told German investigators he injected her with an iron-based solution to help her tan faster. He later said it was a remedy for anaemia.

German prosecutors found that the injection “probably” caused her death but dismissed the case for lack of evidence.

But France reopened it following an autopsy on Kalinka’s exhumed body, convicting the doctor of manslaughter in 1995.

The German cardiologist won a 2001 case against France before the European Court of Human Rights, which ruled he was denied a fair hearing and the right to an appeal in the case.

The cardiologist was stripped of his licence and handed a suspended jail sentence in 1997 for sexually abusing a 16-year-old patient after injecting her with anaesthetic in his surgery.