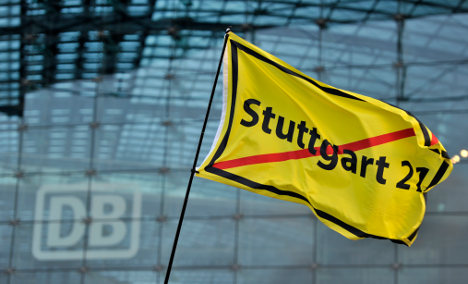 “Until the formation of a new administration, Deutsche Bahn will create no new precedents – neither in construction, nor the award of new contracts,” company board member Volker Kefer said in Berlin.

In May the company will “officially seek discussion with those who will then be responsible,” he added.

The announcement followed the unprecedented political upset by the environmentalist Greens and the centre-left Social Democrats (SPD) in Sunday’s state election in Baden-Württemberg, where the two parties are set to form a coalition.

The new alliance has thrown the future of Stuttgart 21 into question, though. For years the Greens have opposed the multi-billion-euro rail project, and last year became part of a massive protest movement that aims to halt the revamp of the city’s main train station..

But the SPD has backed the project, which requires 16 new tunnels, 18 new bridges, 60 kilometres of new train track and three new stations, including a new underground through-station in Stuttgart.

SPD state leader Nils Schmid said Monday that he would support the project in the event of a referendum, saying that pulling out would burden Baden-Württemberg with major compensation damages. But ultimately the decision remained with Deutsche Bahn and the federal government, he said.

As thousands of demonstrators gathered outside the Stuttgart building site to renew their protest of the rail project on Monday night, both parties called for a suspension to construction until they could come to an agreement on the issue.

The Green party’s likely candidate to become the southwestern state’s new premier, Winfried Kretschmann, said he foresaw problems with his coalition partners over the issue.

But Kretschmann also promised a new kind of governance in contrast to the defeated conservative Christian Democrats’ style, which he called “confrontational” on the subject of Stuttgart 21.

“We will try to govern this state with consideration and measure,” he said, adding that he planned to talk “calmly” with Schmid.

“There is good chemistry between us. We think along the same lines,” he said.

Coalition talks are expected to last through late April, with the state parliament set to elect the new premier on May 12.