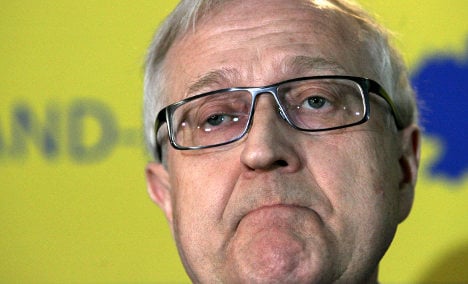 It was their worst election result on record in Rhineland-Palatinate.

Brüderle, 65, has led the FDP in his state for some 28 years, and was re-elected to the leadership post with 96 percent support just two weeks ago.

The party’s state treasurer Jürgen Creutzmann said Brüderle had planned to withdraw his candidacy for the position in two years to open the way for a new beginning, but had chosen to take the step early.

Brüderle plans to maintain his position as economy minister, however, saying there was “no connection” between the two.

But Brüderle embarrassed the government last week when admitted that their recent decision to reverse its nuclear energy policy was made simply to gain votes in upcoming state elections.

After the FDP’s dismal election results in the elections over the weekend, many of his fellow party members have accused Brüderle of turning voters against them with the gaffe, though there were no direct calls for him to step down.

Meanwhile all other members of the FDP’s Rhineland-Palatinate leadership also plan to open their seats to new people on May 7, said Creutzmann.

“We want to document that we did not use Rainer Brüderle as a scapegoat, but that we all have collective responsibility,” he said.