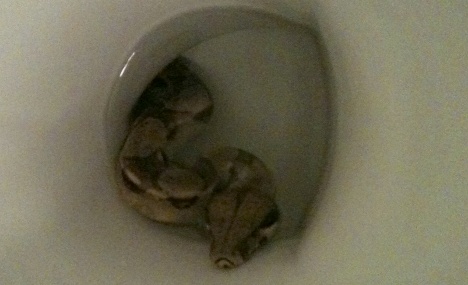 The girl discovered the snake in the toilet bowl when she lifted the lid on Saturday evening at her family’s apartment in the Linden-Süd district, spokesman Holger Hilgenberg said in a statement.

She informed her 39-year-old mother, who called police immediately, they said.

Officers photographed the reptile and consulted with animal rescue services at the fire department.

“But before the animal could be retrieved, it disappeared into the drain pipe, and a ‘search’ was fruitless,” Hilgenberg said.

According to the local veterinary school the snake was a boa constrictor, a non-venomous genus that poses no danger to humans.

“The reptile probably escaped from a terrarium.” Hilgenberg said, adding that the owner was still unknown.