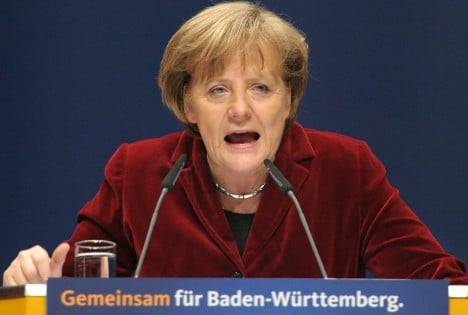 She said the loss suffered by her Christian Democrats (CDU) Sunday in their southwestern conservative heartland meant that the party could not return to “business as usual” – though she said she had no plans to reshuffle her cabinet.

“That is a watershed moment for the state and also in the history of the Christian Democratic Union. We will have to work through this painful defeat with our friends in Baden-Württemberg for a while to come,” she said, referring to the CDU losing power after governing the state for 58 years.

“The debate in connection with the Japanese nuclear plant of Fukushima was clearly what led to our defeat … My view of atomic energy has changed since the events in Japan.”

Merkel said she was a supporter of nuclear power but that the post-tsunami crisis at the Fukushima plant had led her to rethink her position. Earlier this month, Merkel suspended a planned extension of the life of German nuclear reactors, four of which are in Baden-Württemberg. She also temporarily shut off the country’s seven oldest reactors pending a safety review.

Nuclear power is unpopular in Germany, but many voters saw Merkel’s zigzagging as an electoral ploy. It cost Merkel support while boosting the Greens, who doubled their score in Baden-Württemberg and tripled it in the western state of Rhineland-Palatinate, where they are expected to form a coalition with the centre-left Social Democrats.

The triumphant Greens said Monday their historic gains were just the start of a campaign that would sweep the country in a “super” election year and party leader Cem Ozdemir said they had the wind at their backs.

“It is obvious that voters are looking to us to play a new role,” he told the news agency AFP. “We want to give the voters who chose us for the first time a new electoral home.”

Co-leader Claudia Roth said the success of the Greens in wealthy Baden-Württemberg, where industrial giants Porsche, Daimler and Bosch are based, was especially promising.

“A Green state premier in Baden-Württemberg, home to the automobile and mechanical engineering industries, will show that you can make a profit with green ideas and that ecology and the economy are not at odds,” Roth told AFP.

She said the Greens aimed to win representation in the northeastern state of Mecklenburg-Western Pomerania – the last region where they have no seats – in September.

Roth was also bullish for the party’s prospects in Bremen’s May elections and in the capital Berlin, which votes in September and could see the Greens capture the helm of their second state legislature.

Founded as an anti-nuclear, ecologist outfit in 1980, the Green party gradually made inroads throughout West Germany state-by-state, and served as the junior partner in a Social Democrat-led federal government 1998-2005.

During that time, they wrote legislation that would have mothballed all of Germany’s nuclear reactors by around 2020.

However, Chancellor Angela Merkel’s centre-right government overturned that decision last October – a move that came back to haunt her in light of the nuclear disaster at Japan’s Fukushima plant this month.