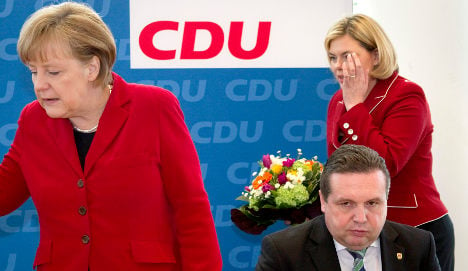 Merkel’s unpopular decision to extend the life of Germany’s nuclear reactors undoubtedly helped boost the Greens, who will now hold a state premiership for the first time. But the election results could also have repercussions for the chancellor’s centre-right coalition.

In particular, the political future of Foreign Minister Guido Westerwelle, whose Free Democratic Party (FDP) was trounced in both states, could hang in the balance.

Newspapers in The Local’s media roundup tried to divine the political implications.

“After 58 years in power, the Christian Democrats have lost their southwestern stronghold. Meanwhile the Greens have their first chance at a premier in a conservative, economically-successful, middle-class state,” conservative daily Frankfurter Allgemeine Zeitung wrote.

“Months ago, during the violent demonstrations against Stuttgart 21, Chancellor Angela Merkel stylized the Baden-Württemburg vote as a referendum on Germany’s future prospects. Germany’s future is not lost if the Greens’ Winfried Kretschmann takes up the state premiership in Stuttgart. On the contrary, in Berlin the sore election losses will raise all sorts of questions – about what the fall of the FDP will mean for future party chairman Guido Westerwelle, and for CDU leader Merkel.”

Right-wing daily Die Welt called the potential new coalition in Baden-Württemberg a “bizarre constellation” that wouldn’t fit in – at least not at first.

“Democracy can be exciting. It exists on the possibility of change,” the paper wrote. “The change in values has also washed over Baden-Württemberg – the bastion of tradition, and above all the industry success model for the country that continues to flourish – and it has lost its quiet self-assurance.”

“A Greens-SPD coalition has against the foundations, the mentality, and many traditions of Baden-Württemberg. Thus the leaders of both parties – despite the yells of triumph from backbenchers – must try to avoid trampling everything.”

Berlin’s centrist daily Der Tagesspiegel called the election results an upset in the country’s political landscape, and one that the CDU would be forced to navigate gingerly.

“For the Greens on this historic day, everything depends on how they govern at the top. For its survival the SPD must find a substance-driven and non-populist programme with which to escape being squished. The basic question for the CDU – where they can position themselves in the political spectrum – remains, but is will become more acute. Particularly because they will have to dangerously open themselves to the Greens as they lose the FDP as a coalition partner. Altogether this means major aftershocks are to be expected.”

But centre-left weekly Die Zeit said that along with the disaster comes an opportunity for the conservatives.

“With Baden-Württemberg the CDU has lost a core piece of their identity,” the paper wrote. “Now there could be room to begin new politics with people like Norbert Röttgen, Ursula von der Leyen, Thomas de Maizière or Julia Klöckner.”

Changes are also afoot among the Free Democrats, with Economy Minister Rainer Brüderle set to take the fall for his party’s loss in Rhineland-Palatinate, where they failed to clear the five-percent hurdle to win seats in the Rhineland-Palatinate state legislature, the paper said.

“Is there hope that the country could at least get a better government instead of none at all? One doesn’t dare to think it. But after this Sunday there can be no more business-as-usual.”

Leftist daily Der Tageszeitung said the elections were the start of a revolution that would reverberate throughout the nation. The Greens have been working for more than 30 years on the very issue that decided the results, but the party must now take decisive action on other controversial policies.

“Amid all the understandable celebration, this also means that the party must take responsibility. Hiding behind the SPD through abstaining is no longer valid. Now is the time to show their colours. The election day loser is clearly [Baden-Württemburg state premier] Stefan Mappus. His smash-and-grab politics are to thank for the toppling of the conservative bastion. The citizens will no longer tolerate this kind of policy making. They demand more participation and credibility.”

According to centre-left daily Süddeutsche Zeitung’s assessment, the elections were an identity crisis for the CDU, an existential crisis for the FDP and a spectacular triumph for the Greens – but such shake-ups were the point of democracy.

“The horror over the nuclear catastrophe and the failure of the safety mechanisms in Japan helped define the election. The far-off catastrophe became one that was closely felt, and justified those who have always warned against atomic technology. Maybe the elections would have gone differently if they’d happened 10 weeks earlier or later. But that is true for many elections, and no cause to downplay the meaning of their results. They will characterize the nation for the rest of this legislative period.”