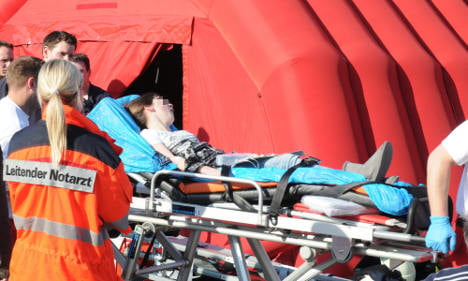 Some 60 people were injured on Sunday in a stampede when an unexpectedly large crowd showed up for autographs with stars of Germany’s equivalent to TV show “American Idol” at , with more than two dozen hospitalized, police said Monday.

Some 19,000 fans came to meet this season’s favourites on Deutschland sucht den Superstar at the CentrO, a shopping centre in Oberhausen, where organizers said they had expected just 5,000 people.

Broadcaster RTL had advertised the event online as a chance to meet the contestants.

After about 4,000 fans were allowed inside the shopping centre, organizers closed doors behind them, and pressure from anxious fans still outside caused a panic.

Injuries to youths between 12 and 17-years-old included broken bones, shock, and loss of consciousness, with rescuers setting up emergency treatment tents to handle the crowd.

RTL wrote on its website that while the event organizer had been the shopping centre, they remained “terribly sorry” about the incident.

“It was unexpected that so many would come,” spokeswoman Anke Eickmeyer said. “We will consider ways to become friends with the injured fans.”

Police in the North Rhine-Westphalian city refused to reveal the status of the injured, saying they would provide more details later on Monday.