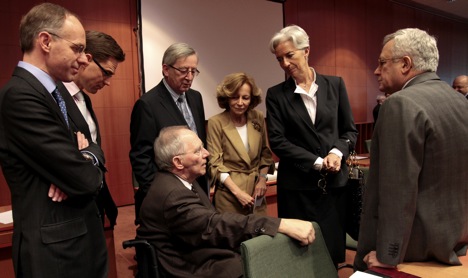 According to a report in news weekly Der Spiegel, the Finance Ministry’s official advisory board wrote a letter to Schäuble, warning that the plan outlined in Brussels could “damage the development of the eurozone and threaten to over-burden Germany and other donor countries.”

But estimates by the German Institute for Economic Research (DIW) suggest the new rescue deal means the German taxpayer would be able to sustain another euro crisis, even if several countries were affected.

At the Brussels summit, Merkel insisted on a last-minute change to a €700 billion permanent rescue fund for the embattled eurozone.

The change means Germany will avoid having to pay a lump sum of €11 billion in 2013 – a payment the government feared would put its finances under too much short-term pressure.

Instead, it will pay five smaller payments each year from 2013 to 2017 to cover its €22 billion cash payment into the fund, which is being set up to bail out shaky eurozone members and keep the currency stable.

The Finance Ministry’s 31-strong advisory board said the deal confirms “the errors in financial policy and controlling the financial markets.” It means countries with bad state finances would be bailed out by healthy ones.

The Associaion of German Banks defended the deal. “Germany is an export country and profits from a stable euro,” association President Andreas Schmitz said in a statement. “That’s another reason why the country is digging deep to offer guarantees to prevent unstable countries from falling into bankruptcy.”

But Schmitz warned the rescue package should not be used as a license to run up new debts.