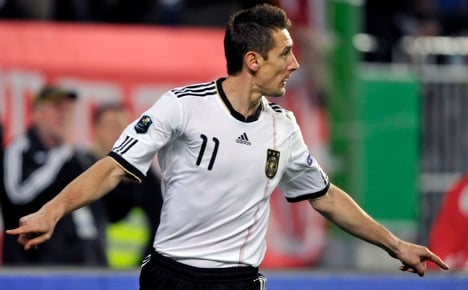 The win sent Joachim Löw’s side eight points clear of the chasing pack in Group A, with Belgium, Austria and Turkey all seeking to close the gap on Tuesday. Kazakhstan remain point-less and goal-less at the bottom of the group.

“We know they weren’t a great side although they were compact and defended pretty well but I’m pleased with my goals at the beginning and the end of the game,” said Klose after the game.

Löw had called on his men to entertain against their lowly opponents, ranked 132 in the world, and his players did not take long to warm the crowd up, taking the lead within three minutes.

Dreadful Kazakhstan defending allowed Bayern Munich striker Klose to sneak in completely unmarked at the back post from a free-kick on the left and slot the ball home from less than a yard out.

In the first half, the visitors’ goal was under constant siege and Germany missed a couple of gilt-edged chances before finally doubling their advantage in the 25th minute.

Real Madrid playmaker Mesut Özil whipped in another set-piece, from the right this time, into a crowded penalty box and Thomas Müller beat his marker to the header, nodding it smartly into the corner.

And Müller made it three just before the break, chesting down another cross from Özil, finding himself totally unmarked in front of goal and firing it past the hapless David Loria between the Kazakhstan posts.

With Germany enjoying almost unlimited possession, the second half began with the feeling of a training game and the sell-out crowd at the Fritz-Walter Stadium, home to Bundesliga club Kaiserslautern, began to show its frustration.

The visitors even had a few breakaway chances of their own, forcing goalkeeper Manuel Neuer into two sharp saves.

Even the introduction of the Bundesliga’s top scorer, Bayern Munich’s Mario Gomez, did not give Germany the required cutting edge as they too often tried to pass the ball into the net.

Another pin-point pass from the impressive Özil found his club colleague Sami Khedira in the 81st minute, but the midfielder could only head wide, capping a frustrating second half for the home side.

But the dependable Klose gave the fans something to cheer about on their way home, tapping home a fourth just before the end for his 61st international goal, bringing him within seven of Gerd Müller’s all-time German record.

“I think the first half was good,” said Löw. “We scored three goals and had plenty of chances against a team that played very defensively. But in the second half, we didn’t keep up the tempo from the first half and we played a bit too slowly.”

Captain Philipp Lahm said, “We did well in the first half, but we were not so good in the second, that was clear.”

Müller said: “We are pleased we won the game and I think it looks good for us in terms of qualification now.”