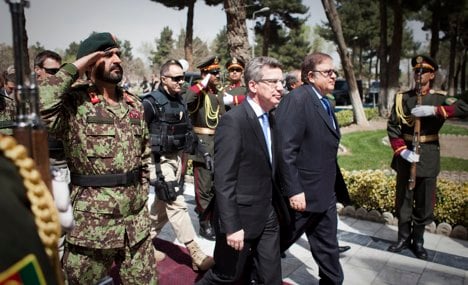 He promised the soldiers the support and recognition of the German population, and said, “It was important to me to come here soon. I’ve come to learn.”

The new defence minister, who took over from the disgraced Karl-Theodor zu Guttenberg at the beginning of March, also met Afghan President Hamid Karzai and Defence Minister Abdul Rahim Wardak, as well as the leader of the international military operation in Afghanistan ISAF, US General David Petraeus.

After the talks with Wardak, de Maizière promised that Afghan security forces would continue to be trained by German forces, saying that the partnership between German and Afghan soldiers was “the key to success.”

De Maizière said the handing over of power to Afghan forces would continue as planned, which means the first seven towns and provinces will be handed over to the Afghan army and police force in July. “This is our responsibility to the future,” the minister said.

The seven provinces include Mazar-i-Sharif in the north of the country, where the regional ISAF headquarters, controlled by Germany, is located.

The Bundestag voted overwhelmingly Friday to broaden the military mandate in Afghanistan.

Up to 300 German airmen will take part in the mission, which will start by June at the latest. They will serve on NATO airborne warning and control system (AWACS) aircraft, which monitor Afghan airspace.