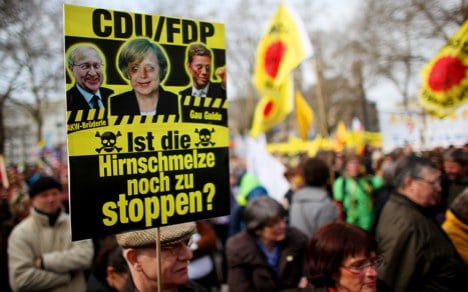 One of the organisers Ausgestrahlt said 250,000 people took part in demonstrations in four major cities marching under the banner “Fukushima Means: No More Nuclear Power Stations.”

Marches took place in Hamburg, Cologne, Munich and the capital Berlin ahead of the vote in wealthy Baden-Württemberg state on Sunday at which nuclear energy is set to be a key issue.

In a rainy Munich, police spoke of 30,000 participants, while organisers said there were 40,000. The marches in Hamburg and Cologne attracted 50,000 and 40,000 respectively, organisers said.

Hailing the protests as “Germany’s biggest ever demonstration against nuclear power,” Ausgestrahlt said, “the government’s answer must be to turn the reactors off.”

Curd Knuefer, 26, a Berlin student, said that in a context where majority public opinion had long been hostile to nuclear energy the Fukushima accident had been a wake-up call.

“We need to learn the lessons of Japan: nothing is impossible,” said one placard.

“Today’s demonstrations are just the prelude to a new, strong anti-nuclear movement. We’re not going to let up until the plants are finally mothballed,” said Jochen Stay, an Ausgestrahlt spokesman.

Merkel decided on March 14, in light of the nuclear crisis in Japan, to observe a three-month moratorium on extending the lifetimes of Germany’s 17 reactors and to shut off the oldest seven temporarily, pending safety checks.

Voters believed she was merely electioneering, despite her protests to the contrary, and reported comments from the economy minister seemingly confirming this have added to Merkel’s woes ahead of Sunday’s must-win election.

Her conservative Christian Democrats has braced for a tight result in the southwestern state they have held for 58 years.

Polls show the ecologist Greens, spurred by anti-nuclear sentiment in the country, could make history and garner enough votes with the opposition Social Democrats to govern with Germany’s first-ever Green state premier.