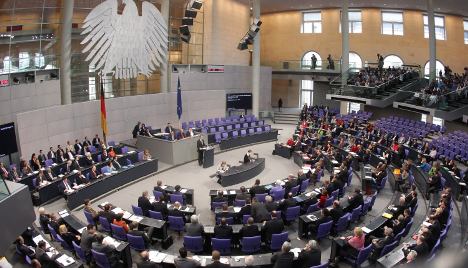 Daily Saarbrücker Zeitung reported that under the plan agreed by the major parties, MPs who misbehave will be fined €1,000 for a first offence and €2,000 for repeat infringements.

The ruling centre-right coalition along with the centre-left opposition Social Democratic Party have agreed to the new penalties set by the Bundestag’s rules committee. The environmentalist Greens and socialist Left party oppose the move, however.

They have in the past been in trouble for holding up placards and wearing t-shirts with slogans, in contravention of parliamentary standards. The penalty will apply for “not insignificant infringements to the order or the dignity of the parliament,” the committee has ruled.

It will be imposed at the discretion of the sitting president of the Bundestag. The committee has refused to issue a “nuisance list” of potential infringements such as waving placards or wearing t-shirts.