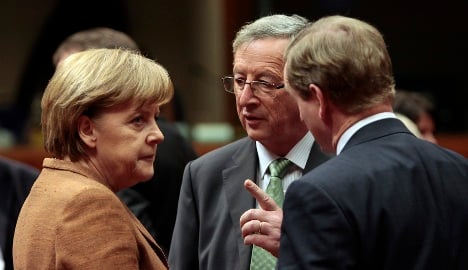 Merkel, who has been increasingly criticized for her go-it-alone approach on the common currency – and more recently on nuclear power and intervention in Libya – insisted on a last-minute change to a €700 billion permanent rescue fund for the embattled eurozone.

The change means Germany will avoid having to pay a lump sum of €11 billion in 2013 – a payment the government feared would put its finances under too much short-term pressure and cause headaches during the next federal election.

Instead, it will pay five smaller payments each year from 2013 to 2017 to cover its €22 billion cash payment into the fund, which is being set up to bail out shaky eurozone members and keep the currency stable.

The victory will help Merkel’s Christian Democratic Union in key state elections, including the critical poll in the economic powerhouse of Baden-Württemberg on Sunday. These state polls are the prism through which many of Merkel’s recent decisions are being viewed by political analysts, most notably her closure of seven nuclear power plants and three month review of nuclear policy in the wake of the Japanese atomic plant crisis.

Economy Minister Rainer Brüderle inadvertently fuelled this perception when he reported told a meeting of business leaders that the nuclear reversal was simply an election tactic. The minutes of the meeting were quoted Thursday by daily Süddeutsche Zeitung.

As the eurozone’s biggest economy, Germany will pay €22 billion of the €80 billion cash that the fund will use. The other €620 billion will take the form of loan guarantees.

Merkel’s sudden change of direction ahead of the summit in Brussels where the package was being finalized has annoyed European partners.

“Merkel has to be clear that no deal stands until all the signatures are there,” one EU diplomat warned, according to daily Die Welt.

According to Die Welt, Eurozone chief Jean-Claude Juncker, asked whether the group could have done without the last-minute extra negotiations, replied laconically: “Of course.”