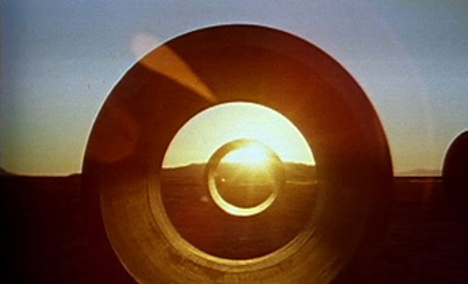 Land art is nature boy’s street art – art taken off the canvas and into the field to merge with the landscape. The movement emerged in the United States in the 1960s and 1970s, when its most famous piece “Spiral Jetty” was created by Robert Smithson on the shore of Utah’s Great Salt Lake. A new exhibition at Hamburger Bahnhof includes works by Richard Long, Joseph Beuys, and Smithson himself.

Italian director Michelangelo Antonioni is a cinematic icon. Blow Up (1966), one of his most famous films, screens at The Establishment, Thursday night, kicking off a three-week series that also includes Zabriskie Point (1970) and The Passenger (1975). Shown in English with German subtitles, this three flick string offers an intimate encounter with one of the big screen big guys.

The back corner of a Kreuzberg courtyard becomes a stage for some rather interesting music Friday night. Johnny Change and Luke Munn play bowed and wind-activated materials along with “found urban sonic recordings in disguise.” Then Robin Hayward merges the pulsing sounds of his microtonal tuba with the vibrations of Morten J. Olson’s rotating bass drum. Intrigued? Step quietly through the halls then settle in among the cobblestones.

Women Among the Horses – My Lovely White Dog Dance Company

French choreographer Nathalie Larquet’s tale of loss and survival begins at the end of an 111 year journey. A storyline based on the perseverance of five women, their past, and the reality of their new existence makes for a powerful evening of drama and myth.

The Museum Zündorfer’s ancient tower became a museum in the 1970s. And it’s one of the city’s coolest spaces to see art. Stop by Sunday afternoon for the opening of an exhibition of Cologne photographer Frieder Schumacher’s shots of South Korea and New Zealand.

Among works by young German filmmakers, this year’s Lichter Film Festival features cinema from Lithuania. View a diverse program of movies from the former Soviet state including Jonas Mekas’ 1971 work Reminiscences of a Journey to Lithuania. Go early and visit the festival kitchen where a Morrocan feast and Japanese bento box are a couple of the weekend’s culinary highlights.

At age six, she started singing in the children’s chorus at the Hamburg State Opera and she never looked back. One of Germany’s most celebrated sopranos, Mojca Erdmann graces the stage at Frankfurt’s Old Opera House, Wednesday night where she’ll charm the audience with works by Mozart, Debussy, and more.

Materials like wood, steel, and gold are frequently featured in the elegant work of Black Forest-born artist Thomas Straub. For his last solo show at the Hamburg gallery Tinderbox, he used neon lights to create a site-specific installation inspired by dawn. See what he’s churned up for his next exhibition when it opens Friday night.

One of the most passionate works ever composed for choir, Mozart’s Requiem is something everyone should see live at least once. If you’re in Munich Saturday, head to Theatinerkirche where the Philharmonic Choir of Munich performs the masterpiece in honour of Japan. The concert is free, but empty your pockets at the door because all donations go to helping the earthquakes littlest victims, the children.

Nature, music, the body, time and space are all things German artist Olaf Nicolai considers when making art. For his latest work, he combined 12 songs written during each month in 2010 to create a sound installation for the Pinakothek der Moderne’s sweeping staircase. Go Sunday to hear the stairs sing.

“The rain in Spain stays mainly on the plain.” Improve your English diction this weekend at Munich’s Amerika Haus where the American Drama Group Europe stages the George Bernard Shaw classic. You’ll be singing like Eliza Doolittle all week long.