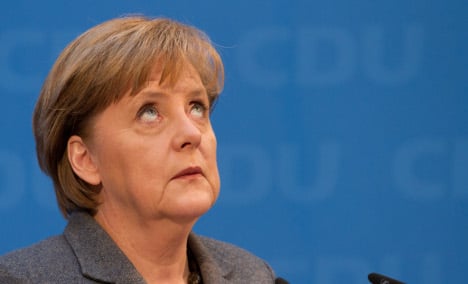 But the opposition centre-left Social Democrats (SPD) also lost some support, dropping one point to 25 percent.

In accordance with other recent polls, the environmentalist Greens were the big winners, gaining two points to reach 20 percent of voter support.

Meanwhile eight percent of the poll’s respondents said they would vote for “other parties,” including Merkel’s junior coalition partner party the pro-business Free Democrats and hard-line socialists the Left.

With state elections scheduled for March 27 in Baden-Württemberg and Rhineland-Palatinate, Merkel’s coalition had a combined support of just 38 percent, well behind a potential coalition between the SPD and the Greens, who had a collective 45 percent.

Manfred Güllner, head of pollster Forsa, which conducted the survey, said the results “very clearly” showed Merkel’s response to the nuclear crisis had been damaging.

Last week Merkel decided to impose a three-month moratorium on her government’s unpopular decision from last autumn to extend the lifespans of Germany’s nuclear power plants after the earthquake and tsunami caused a partial atomic meltdown in Japan.

She also opted to temporarily shut down the country’s older nuclear reactors, telling parliament that recent events in Japan had caused her to reconsider the risks of atomic energy.

But 71 percent of those questioned by Forsa said they believed these decisions were nothing more than opportunistic “election tactics,” Güllner told Stern.

Merkel’s personal reputation has also suffered, with just 50 percent of respondents saying the chancellor was still credible – down 18 points from half a year ago.

Meanwhile their trust in her competence fell 12 points to 72 percent.

Four out of five (79 percent) said Merkel too often made decisions based on election tactics.

And just 40 percent said they would vote for Merkel if elections were held soon.

Forsa surveyed 2,504 representative citizens for the poll between March 14 and 18.