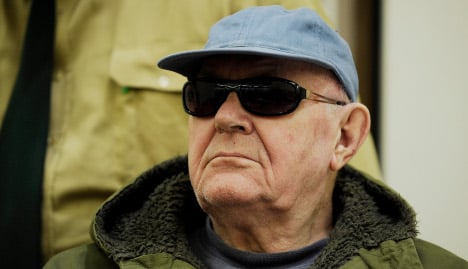 Delivering closing remarks in the high-profile war crimes trial, expected to be one of the last of its kind, prosecutor Hans-Joachim Lutz said the 90-year-old Demjanjuk had participated willingly in the Holocaust during a six-month stint as a guard.

“Armed with a weapon, he transported the victims from the wagons, undressed them and led them into the gas chambers,” Lutz told the court in Munich, southern Germany. “He participated willingly in the murder of 27,900 Jews.”

There is “no reasonable doubt” of Demjanjuk’s involvement in the crimes committed at the Sobibor camp in Nazi-occupied Poland during March and September 1943 when he was alleged to have been there, added the prosecutor.

Ukrainian-born Demjanjuk, who was deported from the United States in May 2009, where he worked for decades as a mechanic, denies the charges against him.

It is still not clear when a verdict could be handed down, although the court has scheduled hearings until May 12.

Wearing his now familiar blue baseball cap and sunglasses, the accused was wheeled into the courtroom, accompanied by two medical staff, to hear the prosecution’s case.

He appeared relaxed, joking with one of the medics and taking a small sip from a plastic cup. He listened to proceedings sitting up on a stretcher, covered in a white sheet.

Lutz said he could have called for anything between three years and 15, which constitutes life in Germany.

He said one of the main reasons for a shorter sentence was that Demjanjuk had already spent time in jail in Israel, accused of being “Ivan the Terrible,” a particularly sadistic Nazi guard at another camp, Treblinka.

Demjanjuk was released after the Israeli Supreme Court established they had the wrong man.

Also counting in his favour was “definitely the fact that he did not report voluntarily for duty in a death camp,” Lutz added.

A member of the Red Army, Demjanjuk fell into German hands as a prisoner of war in 1942.

“The accused was at first a victim of German aggression. Then he became a perpetrator with his participation in the mass murder of Jews,” said Lutz. “It’s not about passing off German guilt for the mass murder committed by the SS onto someone else,” he added.

The trial, which began under intense media spotlight in November 2009, has focused on two central questions: was he a guard at Sobibor and if so, was he in a position to have refused to take part in the Nazi death machine?

Lutz charged that Demjanjuk was convinced by Nazi racist ideology.

“He was aware that the victims suffered physical and mental torture … in addition he adopted the Nazi ideology of genocide,” he said.

“At the same time, he did not flee the camp, although he had the opportunity to do so.”

The accused has said nothing during the trial, often appearing asleep, sometimes emitting small groans. Constantly at his side are his medical team and a Ukrainian interpreter. However, his lawyer has read out three statements on his behalf.

In the latest statement, he threatened to go on hunger strike unless the court admitted evidence the defence said would cast doubt on the allegations against him.

In the statement, he also dismissed the proceedings as a “political show