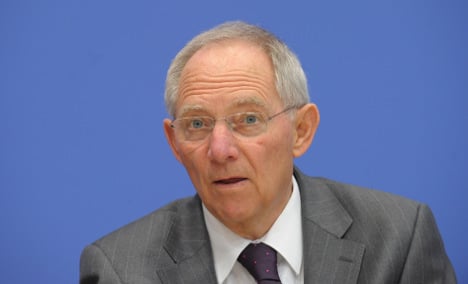 “We have every interest in saying that Islam is a part of our country and in inviting Muslims to value what we have achieved in the Western World,” the Christian Democrat told the latest edition of political magazine Cicero.

Religion, faith, democracy and universal human rights are all compatible, he added.

Still, immigrants must strive to integrate in Germany, said Schäuble, who initiated the government’s Islam conference in 2006 while he was interior minister in attempt to promote a healthier dialogue with the approximately four million Muslims living in the country.

The recent suggestion by Turkish Prime Minister Recep Tyyip Edogan to his countrymen – that they first learn Turkish, then German – was not helpful, Schäuble told the magazine.

Turks, many of whom came to Germany as so-called “guest workers” in the 1960s and 1970s, make up the country’s largest group of immigrants.

Schäuble also said he wasn’t worried that conservative Turks will seal their children off from German society.

“When you look at what young women from tradition-oriented families in particular achieve despite resistance from their families, and what power lies in this young generation, you can only marvel – and be happy,” he said.

In early March Germany’s new interior minister, Hans-Peter Friedrich, made the controversial statement that Islam did not “belong” in Germany because it lacked a historical foundation. The conservative Bavarian plans to meet with the Islam conference plenum next Tuesday.

Friedrich’s comments mirrored similar statements he made last autumn amid a rancorous debate over whether Muslim immigrants are capable of integrating into German society.

The debate was sparked by former Bundesbank board member Thilo Sarrazin, who made a number of anti-immigrant statements aimed mainly at Turks and Arabs, coinciding with the publication of his controversial book Deutschland schafft sich ab – Wie wir unser Land aufs Spiel setzen, or “Abolishing Germany – How we’re putting our country in jeopardy.”

Friedrich was widely criticized by Muslim groups and even members of Chancellor Merkel’s centre-right coalition for unnecessarily reigniting the country’s acrid integration debate immediately after taking up the reins at the Interior Ministry.