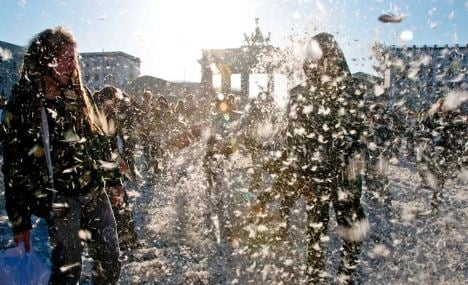 When the tail-end of the capital’s grand boulevard Unter den Linden broke into pillow-fighting anarchy around 4 pm, handfuls of tourists and passersby were engulfed in a blizzard unlike any they might have experienced this winter.

The normally prim and orderly Pariser Platz, home to museums and embassies, was nearly unrecognizable as pillows flew and feathers filled the air.

“This is complete chaos, I love it!” exclaimed Taichi Nagai, a visitor from Japan who had unwittingly walked straight into the action.

The event was organized with the goal of breaking the record for the largest pillow fight in history, currently held by a group in Somerset, England, which gathered 3,707 participants in 2008.

Though official numbers for Sunday’s Kissenschlacht have not yet been released, more than 12,000 people responded to a Facebook event created by the pillow fight’s organizers, a group called the Flashmob Berlin/Brandenburg.

The term “flash mob,” in common use for about a decade, broadly refers to a group of people who assemble suddenly in a public place, carry out a coordinated act for the purpose of satire or simple entertainment, and then suddenly disperse.

In that sense, Sunday’s flash mob was a smash hit, drawing spontaneous participation from people of all ages and nationalities.

But there was no sudden dispersal. Though the fighting needed to last for only a minute to qualify for the record, it went on for over an hour.

“We showed up armed with our pillows, a little before 4 pm,” recounted Curtis Sorrells, a student visiting from Washington, D.C. “It was getting pretty full and then right at the hour, everyone kind of just busted loose, hitting each other, and the feathers started flying. It’s crazy out here. So much fun.”

Not everyone shared in the revelry, though.

One taxi driver, caught in the crowd at the fateful hour, tried to turn his car around to escape the pillow-fighting mob.

But he was shown no mercy. His car was clobbered, engulfed in feathers and fluff, and his windshield wipers did little to clear his field of view.

Police officer Matthias Brandau, surveying the action from a distance, laughed it off and said there was little he and his fellow officers could, or needed, to do.

“What do you mean, ‘maintain security?’” he responded to a question about safety. “They’re fighting with pillows out here. Nothing in the law says that’s something one can’t do.”

“These pillow fights kind of just crop up here every couple of years. It’s something the people enjoy,” he added.

Officer Brandau then excused himself, and went to pose with his fellow officers for a photo.

His reaction indicated that Berlin’s flash mob enthusiasts, whether they broke the pillow-fighting record or not, will have no trouble organizing like-minded events in the future.