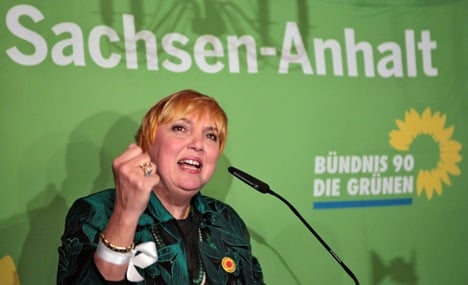 Merkel’s conservative Christian Democrats (CDU) came first and were likely to stay in power in a grand coalition with their main political opponents at national level, the centre-left Social Democrats (SPD).

The Left and the SPD potentially could form a left-wing alliance to oust the awkward right-left grand coalition. However, the Social Democrats announced before the vote they would not support a state premier from The Left, which is the successor to East Germany’s communist party.

“The SPD always said that and that’s how it will remain,” said Jens Bullerjahn, the Social Democratic state leader and Saxony-Anhalt’s current finance minister.

But the big winners of the vote in the impoverished eastern German state – where unemployment stands at 13 percent – were the Greens, who more than doubled their score to seven percent.

The surge in the Greens’ support was attributed to Merkel’s stance on nuclear power after Japan’s earthquake and tsunami on March 11 pushed reactors at the Fukushima plant to the brink of a meltdown.

People “want to know, particularly after the tragedy in Japan, what a responsible energy policy will look like,” Greens co-head Claudia Roth said.

The result will give the environmentalist party high hopes for a much bigger prize: success in an election next Sunday in the wealthy southwestern state of Baden-Württemberg, the most important of the year’s electoral tests.

The election in Saxony-Anhalt, although driven to a large extent by local issues, “showed one thing: that the rise of the anti-nuclear movement is only boosting the Greens,” the Stuttgarter Zeitung daily wrote on Monday.

Baden-Württemberg, where the CDU have ruled since 1953 – the year before Merkel was born, is home to four nuclear reactors. Saxony-Anhalt has none, but

Germany decided a decade ago to go nuclear-free by around 2020 but Merkel last year postponed the switch-off until the mid-2030s despite strong public unease about atomic energy.

But Japan’s nuclear emergency prompted her last week to announce a three-month moratorium on the postponement and the temporary shutdown of Germany’s seven oldest reactors pending a safety review. She also said she would speed up the transition to renewable energy.

This has not gone down well with voters, however, with a survey Friday showing that nearly seven out of 10 voters thought her moves were “pure electioneering.”

A YouGov poll the day before showed that 81 percent of voters thought her actions over nuclear power were “not credible.”

“Merkel: no one believes her any more” ran the front-page headline in the Berliner Kurier tabloid.

“What Merkel has started is a risky game and there is little to suggest at the moment that she will emerge as the winner. Her change has been too abrupt, too poorly prepared,” Der Spiegel news magazine said this week.

Polls suggest the Greens are also set to double their vote in Baden-Württemberg, raising the possibility that one of Germany’s 16 states might have something no other state has ever had: a Green premier.

Guido Westerwelle, FDP leader, deputy chancellor and foreign minister, called on middle class voters to turn out and vote in Baden-Württemberg and SPD-controlled Rhineland-Palatinate, which also has an election next Sunday.

“As we can see, if you don’t vote there is a big danger of a left-wing majority,” he said.

And this year’s first state election, in Hamburg last month, saw the CDU replaced by the SPD in city hall after a decade in power.