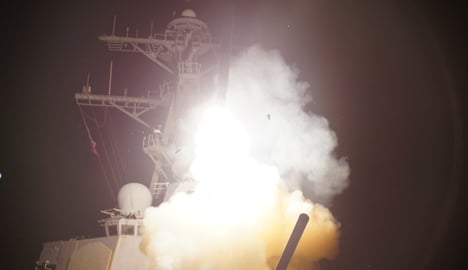 The survey, in the Bild am Sonntag newspaper, found that 62 percent of those asked supported the action in general, while 31 percent were against the international military intervention.

But on the question of whether Germany itself should be involved, 65 percent agreed with the government’s position that Germany stay out, while 29 percent thought the country should participate.

The survey, carried out by the Emnid polling group, asked a representative sample of 501 people.

Parliamentary President Norbert Lammert, a member of Merkel’s Christian Democratic Party (CDU), on Sunday defended Germany’s decision to stay on the sidelines, although he added he could understand the criticism of Germany’s position.

In an interview with Deutschlandfunk public radio, he said that Germany already participates in several international military missions, adding that few other countries are engaged on a similar level in so many different parts of the world.

He said people must accept the fact that Germany only has limited capabilities.

Also on Sunday, Foreign Minister Guido Westerwelle reiterated that the German military would not be sent to Libya, adding that any impression that the decision had isolated the country within the European Union was “completely false.”

Westerwelle said Germany would give €5 million in humanitarian aid to help Libyans, especially refugees at the nation’s borders.