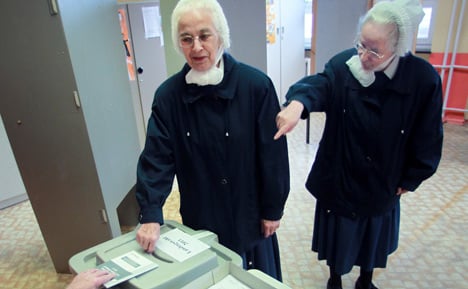 Polls show falling support for Merkel’s conservatives in the small eastern state of 2.3 million people as the chancellor fights off accusations of electioneering after she reneged on a commitment to nuclear power.

A so-called “grand coalition” of Merkel’s Christian Democrats (CDU) and the centre-left opposition Social Democrats (SPD) has governed the state since 2006 and many analysts expect this arrangement to continue.

But the SPD has been gaining in the polls, as Merkel has come under fire over the nuclear issue and the loss of a popular defence minister to a scandal, and they may secure enough votes to join forces with the hard-line socialist The Left party.

If the CDU is booted out in Saxony-Anhalt, it would weaken Merkel further in the Bundesrat upper house of parliament, where the states are represented. The conservatives have already suffered a humiliating defeat last month in Hamburg.

Polls in Saxony-Anhalt put the CDU ahead at 32 percent, followed by The Left and the SPD, both with 24 percent.

Complicating the issue in the state is the ecologist Green party, which has seen its support rise after Merkel announced a moratorium on a decision taken last year to extend the life of Germany’s nuclear reactors.

According to a national poll published Friday by dimap, the Greens have gained five points and the anti-nuclear party looks set to win enough support in the wake of the disaster in Japan to take seats in the regional parliament.

“We want to influence the policies of this country. A red-red coalition (of SPD and The Left) is not enough. The Greens can get things done,” said their candidate Claudia Albert in the run-up to the vote.

If polls are to be believed, Merkel’s credibility has suffered substantially in the wake of the about-turn, which voters seems to believe was made with this — and five further — regional elections in mind.

Friday’s dimap survey showed that nearly seven in 10 thought her decision to hold a moratorium and temporarily shut down seven of Germany’s nuclear reactors was a “pure electioneering manoeuvre.”

A YouGov poll the day before showed that 81 percent of voters thought her u-turn was “not credible.”

“Merkel: no one believes her any more” ran the front-page headline in the Berliner Kurier tabloid.

Political analyst Gero Neugebauer said that the far-right NPD party was also likely to breach the five-percent hurdle required for election to parliament, given the low turnout historically in the state.

“People often vote NPD as a protest,” he said, adding: “It is certain that the neo-Nazi party will get into parliament.”

The Saxony-Anhalt vote will also act as a taster for the politically much more significant election in Baden-Württemberg on March 27, where the CDU could lose power for the first time in 58 years.