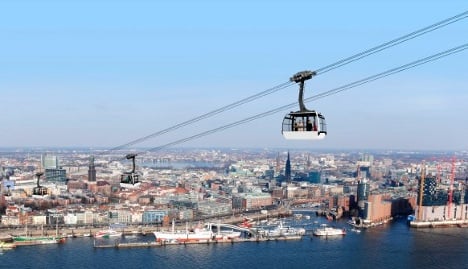 The suspended cable car would connect the famous St. Pauli district to an island in the Elbe River in the Wilhelmsburg district where the International Garden Show will be held that year, daily Hamburger Abendblatt reported.

Gondola manufacturer Doppelmayr and musical production company Stage Entertainment have teamed up for the project, which is under review by the city, a spokesman from the latter company confirmed.

Both firms plan to invest a combined €50 million to get cars swinging over the harbour by April 26, 2013 when the garden show begins, the paper said.

The trip will take 18 minutes, and the highest point on the southern side of the Elbe River will reach 120 metres from the ground.

Passengers will also be able to disembark at an intermediate station near the Theater im Hafen, a harbour-side stage where partner Stage Entertainment has put on “The Lion King” musical for the last 10 years.

The gondola, boasting spectacular views of the city, would likely be in use for between five and 10 years, the paper said.

“Hamburg should have a cable car again,” Stage Entertainment Germany head Johannes Mock-O’Hara told the paper. “It would be another unique attraction for the Hanseatic city.”

The 1963 International Garden Show in Hamburg also featured a gondola.

With some 2.5 million visitors expected for the 2013 event, organizers believe it would get plenty of exposure.

The city’s transportation network would also take part in the running the gondola, which would have cabins carrying about 30 people, the paper said.

The German cities of Cologne, Koblenz and Dresden also have gondola lines or aerial trams.