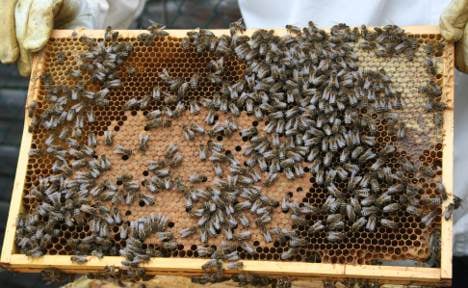 Hans Oberländer wants to make sure bees don’t get a bad rap in Germany just because wasps can be annoying while eating outside during the warmer months of the year.

The director of a university cafeteria in Berlin, Oberländer is taking part in a new project to introduce honeybees to the German capital’s urban landscape. The hobby beekeeper hopes it will help people realize bees aren’t likely to be a nuisance like wasps can be.

Berlin summt!, or Berlin’s Buzzing!, has set out to place honeybee hives on prominent buildings and public areas. Co-founder Corinna Hölzer said the project’s goal is to raise awareness and appreciation for an often misunderstood yet vital creature.

“Although Berlin is already a ‘green’ city, we want people to get interested in the interrelationships within the natural world,” she told The Local.

The inspiration for Berlin summt! came from Parisian beekeeping legend Jean Paucton, who was prop master at the Opéra Garnier. Before he could move his bees to the countryside, he installed hives on the roof of the opera house in 1982. When he saw that the bees were happy and thriving, he got permission to leave them there. They’re still there and the honey they yield is now sold as a luxury item.

Hölzer hopes the project will draw attention to the importance of bees in even urban environments such as Berlin.

Bees are vital for the pollination of plants and the little black-and-yellow workaholics are responsible for dusting nearly three-quarters of the crops that provide an estimated 90 percent of food worldwide.

But monoculture, extensive use of pesticides and the proliferation of diseases and parasites such as the Varroa mite have threatened bee survival, resulting in a sharp decline in their numbers worldwide.

In 2006, the bee population was hit by inexplicable mortality, with some beekeepers losing entire colonies. Of the 298 wild bee species in that live Berlin, almost half are on the International Union for Conservation of Nature and Natural Resources’ endangered list.

According to Hölzer, modern agricultural methods have put bees under extreme stress. “It’s no wonder their immune system has collapsed,” she said. “That’s why it’s imperative to preserve biodiversity, maintain an abundance of habitats and engage in ecological practice in agriculture.”

Country bees in the big city

In contrast, Berlin’s diverse vegetation, particularly its abundant linden trees, make it a haven for bees. About 500 beekeepers live in the city, and, perhaps surprisingly, many bring their bees from surrounding areas to let them feed on its urban buffet.

“Berlin is a big city full of cultural professionals,” Hölzer explained. “I would like them to say: ‘I understand, I’m open to this issue, I can make room on my roof for the bees’.”

With this year’s early start of the bee season, the project participants are meeting this week to schedule the placement of the hives.

Some will be perched atop prominent locations such as the city’s House of World Cultures and Berlin’s parliament building, as well as possibly the Natural History Museum and a cathedral.

Oberländer will also put two hives on the roof of his cafeteria – Humboldt University’s Mensa Nord.

When he saw an ad for the project in the German Bee Journal, Oberländer decided it was a perfect way to combine his hobby with his work. “The cafeteria guests will gain a greater understanding of the honeybee,” he said. “And by buying the honey, they’ll indirectly support the preservation of biodiversity.”

Oberländer, who is the middle link in three generations of beekeepers in his family, said more than 3,000 visitors to Mensa Nord every weekday will have the opportunity to observe the bees through windows on the first floor that look out onto the roof.

The general public can view the hives on June 19 and Oberländer also plans to host regular presentations on Thursdays at noon for interested guests. In July he even plans to remove an entire honeycomb so visitors can see the result of bees’ efforts firsthand.

“Everyone can have a piece of the honeycomb to try – it has a consistency like chewing gum and is exceptionally delicious,” he said.